I recently had the pleasure of introducing Nick de la Canal to our little piece of paradise. Nick is a freelance contributor to QNotes, the biweekly newspaper serving the LGBT community in Charlotte. The strong-jawed 22-year-old journalist with large eyeglasses — who reminded some of us of Clark Kent — was ready to learn more about Key West for an upcoming story in QNotes. 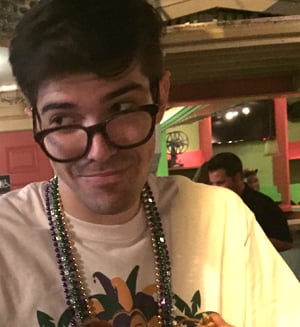 I picked Nick up at the airport Monday afternoon, checked him into Island House and introduced him to Nathan Gay and Mark Watson. Nathan was once editor of Celebrate!, our former local LGBT newspaper, and Mark is king of the 2015 Fantasy Fest celebration who earned his royal title by raising thousands of dollars to benefit AIDS Help. Nathan and Mark are also from North Carolina, so it was fun to watch the three of them relate.

Later that night, I took Nick to Charlie Mac’s eatery to see how our barbecue compares to the barbecue back home. (He said ours was great, but he particularly enjoyed the cornbread.) An hour later, we were sipping cocktails and shoving dollar bills at the outrageous drag queens performing at the 801 Cabaret.

We ran into Matt Hon during lunch the next day. Matt is executive director of the Key West Business Guild, which has been serving LGBT-owned, -operated and -friendly businesses in the Southernmost City for almost 40 years. Matt introduced Nick to Cody White, the owner of Nomadic Stand Up Paddleboard, who was sitting nearby — and Cody took Nick for a paddle on the water the next morning.

One of the nice things about living in Key West’s tight-knit community is the network of contacts you make. It was good to see Nick developing his own contacts, despite just being here for a few days. 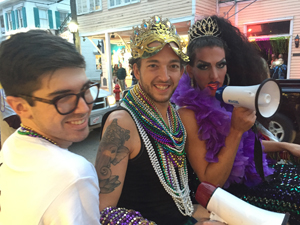 That night, Nick told me about exploring the island on a bike he rented from Eaton Street Bikes. He cruised the length of Duval Street, visited Leather Master on Appelrouth Lane and saw the Southernmost Point Marker and Hemingway House on Whitehead Street — plus Higgs Beach and the historic Casa Marina Resort.

“A bike is the best way to see a new city or town,” Nick told me. “It gives you so much more access than you’d have in a car or on foot, and it’s pretty cheap, too.”

That night he met and chatted with Joey Schroeder, who owns New Orleans House and several of the bars in the island’s “pink triangle.”

In addition to writing for QNotes, Nick works part-time as an announcer on the NPR affiliate in Charlotte. Of course, both jobs require him to be on top of news events at all times. His trip to Key West, however, allowed him to unplug.

On Nick’s last night in town, we stopped at Camille’s Restaurant for all-you-can-eat snow crab legs. 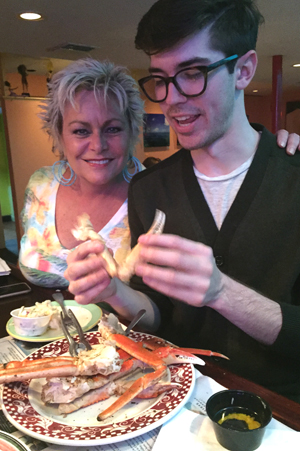 As he was cracking shells and telling me about his paddle out into the mangroves, he admitted that the previous three days had made him completely forget about the news — including the presidential primaries.

“I didn’t even know what day of the week it was,” he confessed. “It was a wonderful escape.”

Here in the Conch Republic, a paradise far removed from the hustle and bustle of mainstream daily life, we pride ourselves on that sense of “escape” — and I was delighted that Nick could appreciate it so quickly.

On Thursday morning, Nick enjoyed a final taste of Key West on our way to the airport: a steaming cup of café con leche and a hearty bacon, egg and cheese on Cuban bread from Sandy’s Café.

“If only I had more time, I would have seen more,” he lamented to me. “But I’ll definitely be back!”