One of the things I’ve always loved about the Florida Keys is the huge and fabulous community of visual artists that flourishes all along the island chain. And nothing exemplifies the size, diversity, and exuberant creativity of that community more than the 2016 Connections Project mural. 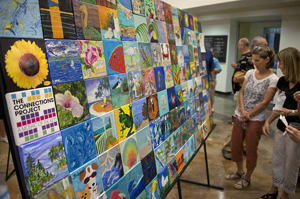 Attendees at the Connections Project’s opening reception view a section of the 24-foot-long mural titled “A Mosaic of the Keys.” (Photo by Andy Newman, Florida Keys News Bureau)

The mural, which stretches 24 feel long, is a mosaic featuring small canvases by nearly 400 (no, that surprisingly large number isn’t a typo!) of the Keys’ artists and arts-minded residents. And it’s on a “road show” from Key Largo to Key West this winter and spring to celebrate the longstanding connection between the community and local cultural initiatives.

Fittingly, the mural is titled “A Mosaic of the Keys” and it was spearheaded by the Florida Keys Council of the Arts. According to Elizabeth Young, the council’s executive director, it’s made up of individual canvases measuring 6 inches square that were provided to creative spirits around the Keys.

“We asked them to create art on the canvases in whatever medium or style they chose,” she explained. “The project is now in its fourth year and the work is outstanding — it really reflects the beauty and the uniqueness of the Keys.” 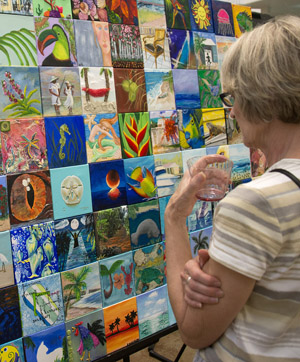 The canvases’ great variety of subject matter, mood and color palette make the mural even more intriguing. Some pieces require thought and interpretation, some beckon the viewer to imagine becoming part of the scene, and others inspire immediate smiles. But it’s not possible to walk away from the mural without being impressed by its vibrant nature and the sheer number of talents who contributed to it.

So where can you view this unique example of collaborative artwork?

It debuted in early February at the Murray Nelson Government & Cultural Center in Key Largo, and will remain on display there until Feb. 19 — before appearing in five other “road show” exhibitions throughout the Keys.

Its next appearance date and venue is Feb. 20 through March 7 at Ocean Sotheby’s Gallery in Islamorada, followed by an exhibit March 7-16 at Giorgione Fine Art in Marathon. After that, from March 17 through April 6, it will be on display at Big Pine’s Artists in Paradise Gallery. And April 7-20 it takes center stage at Royal Furniture in Key West before ending its tour April 21 through May 9 at Key West’s Gato Building, the headquarters of the arts council.

There’s a reception scheduled during the exhibit at each location, but the most exciting element of the Connections Project is what you can receive once the “road show” is over. 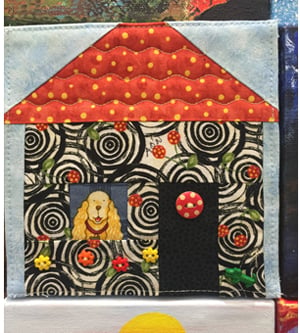 One of the mural’s panels even displays a whimsical fabric-art home with a dog in the window. (Photo by Elizabeth Young, Florida Keys Council of the Arts)

That’s because, after viewing the mosaic mural, you can forge a permanent connection to it — and to the Keys arts community — by making one (or more) of its canvases part of your own art collection. Just donate $35 to receive one individual canvas or $100 for three. You can choose to donate at any reception (click here for reception dates and times), or online by clicking here.

After the “road show’s” conclusion, donors will receive a randomly selected piece (or pieces) of the mosaic by mail. Each one will include a statement from its artist, offering insights into the work and the inspiration for it.

The proceeds from the Connections Project benefit Keys artists and arts organizations through arts council grants — making a positive impact that resonates all around the island chain’s lively cultural community.