Whether you’re a shipwreck fan, treasure seeker or history buff — or simply enjoy fascinating tales of real-life adventure — you should definitely be in Key West Sept. 2-6.

Why? To help commemorate the 400th anniversary of the sinking of the Spanish treasure galleon Nuestra Señora de Atocha. 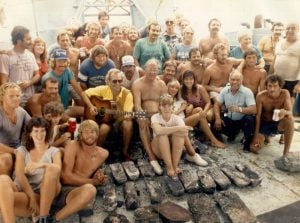 One day after the July 20, 1985, discovery of the Atocha “main pile,” singer-songwriter Jimmy Buffet and treasure hunter Mel Fisher sit perched on a throne of silver bars surrounded by family and “golden crew” members. (Photo by Pat Clyne)

The Atocha sank during a September 1622 hurricane in the Florida Straits southwest of Key West, where it remained until its discovery by shipwreck salvor Mel Fisher and his crew in 1985.

They uncovered the priceless “main pile” of the Atocha’s treasure and artifacts after an exhaustive 16-year search. Underwater archaeologists and divers recovered quantities of gold and silver coins and bars, contraband emeralds, religious and secular jewelry, cannons and other weapons, pottery and rare navigational instruments from the Atocha site.

The discovery was internationally hailed as the shipwreck find of the 20th century. The salvage team, which included Mel’s wife Deo and their children, was nicknamed the “golden crew.”

In September 2022, history and shipwreck buffs can mark the historic anniversary with cultural and adventure-filled events featuring members of the Fisher family and the fabled crew.

The Sept. 2-6 commemoration, called Mel Fisher Days, takes place at a number of Key West locations. It honors the legacy of Mel Fisher as well as the Atocha and other vessels from Spain’s 1622 fleet that were lost in the Florida Straits.

Deo and Mel Fisher, c. 1980, adorned with lengths of gold chain recovered from the 1622 Fleet shipwreck Santa Margarita, which Fisher and his team discovered five years before the Atocha. (Photo by Don Kincaid)

An opening ceremony and Atocha-themed film screening are set for 7 p.m. Friday, Sept. 2, at Key West’s Tropic Cinema. Events are to be guided by Kim Fisher and Taffi Fisher Abt, son and daughter of the late Mel and Deo, who are carrying on the family’s shipwreck searches and heritage.

On Saturday, dive and treasure enthusiasts can meet members of the “golden crew” during a late afternoon gathering and charity fundraiser at the Schooner Wharf Bar, a waterfront watering hole and traditional hangout for the Fisher team.

(Charity fundraising, by the way, is a vital part of Mel Fisher Days. To date, the annual celebration has raised nearly $175,000 for organizations devoted to children and their health and wellbeing.)

Highlights of the Schooner Wharf gathering include the debut and book signing of “Today’s the Day — The Mel Fisher Story” by veteran Florida Keys journalist Wendy Tucker, who helped tell the world about the Atocha find. The presentation of the prestigious Mel Fisher Lifetime Achievement Award, plus auctions, games and contests round out the attractions. 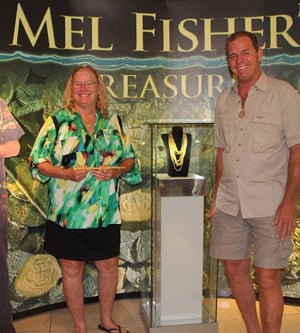 That evening, ticket holders can join the Fisher family and the symposium speakers for a banquet on the hotel beach.

The commemoration concludes Tuesday, Sept. 6, after the unveiling and installation of a memorial plaque at Key West’s Mallory Square. The plaque salutes the spirit of adventure displayed by Mel Fisher and his “golden crew,” and honors those who died when the 1622 vessels sank exactly four centuries before.

Don’t miss the opportunity to mark the 400th anniversary of an iconic moment in Key West history — and pay tribute to one of the island’s legendary characters. For a complete schedule of Mel Fisher Days events, click here.