I was sitting in Aqua Nightclub the other day, chatting with longtime friend and bartender Tom Luna, and realized one reason I love the people in Key West: everyone is a character with an interesting back story on where they came from, why they came to the island and why they stay. 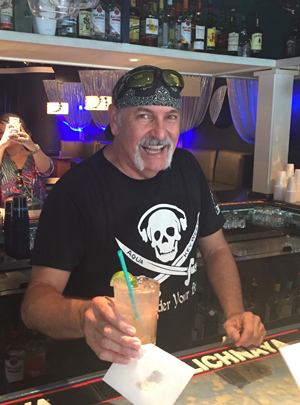 For example, there’s Tom himself — as colorful as anyone in town, that day sporting black shoes, black pants, a black T-shirt with “Surrender Your Booty” on the front and “Life is too short to dance to bad music” across the back, with dark motorcycle glasses holding the black kerchief on his head in place.

Tom has been in Key West for 27 years — since just after New Year’s Eve 1989, when the owner of the Atlanta restaurant where he worked suddenly decided to close the place for a couple of weeks and go on holiday.

Tom went home angry, not knowing how he was going to pay the rent. That same night, a friend in Key West called and encouraged him to come down. Despite the fact that he knew nothing about the island, Tom decided it was time for a change.

“I arrived Jan. 2, 1989, and I never left,” Tom told me. “It was 76 degrees, everything was in Technicolor blue and I was wearing shorts. Immediately, it was my favorite place ever.”

In the almost three decades since he arrived on our shores, he has made the most of the Key West experience.

Tom arrived with a passion for motorcycles he developed growing up in Mobile, Alabama — he rides around town on his Roadstar — and a background in classical ballet. Since then, he has developed and refined his bartending skills at just about every Key West watering hole. 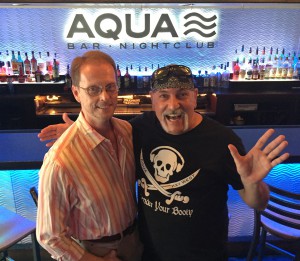 Eric Haley (left) and Tom meet up at Aqua to recall their early days in Key West.

He started tending bar at the Rooftop Café, which pal and well-known crooner about town Eric Haley remembered as the happening place at the time.

“Rooftop was the locals’ place,” Eric advised me as we sat at Aqua. “It catered to all walks of life.”

At that point, a family from North Carolina walked into the bar and greeted Tom with a big hug. Come to find out, the family had met Tom while on holiday last year and even had a photo of him on a trusty iPhone. He served them cocktails while they caught up on what everyone had been doing.

“He’s one of the characters that makes Key West unique and wonderful,” Eric observed, underscoring the obvious truth.

In 1995, Tom and his business partners opened Peppers of Key West, which still sells what I’m pretty sure is the widest range of hot sauces and spicy condiments you’ll find anywhere. The store is a must-see, a great place to shop for a special taste of the island, and renowned for its large tasting bar.

Tom has also trodden the boards at just about every theater in town. One of his favorite shows was “Match” — a comedy staged at the Red Barn in which he played a retired ballet dancer. Tom confided that it was also one of the hardest shows he’s ever appeared in, due to the line load and associations between the character’s life and his own life as a retired ballet dancer. 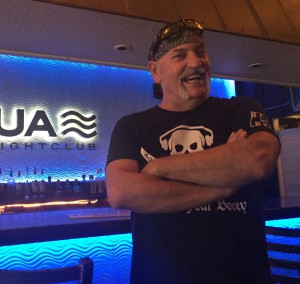 Tom Luna is renowned for his roles in theater and fundraising as well as tending bar.

His next big stage project will be the role of Max in “The Producers” at the Waterfront Playhouse later this season.

The engaging Tom is also a major draw at benefits around town, especially when he’s asked to host an event. He was hysterical as the emcee at last year’s Headdress Ball, one of the premier events of Fantasy Fest.

When I asked about his work within the LGBT community, he echoed the sentiments of so many others who have learned what makes this island so unique.

“It’s Key West,” Tom told me. “Nobody gives a crap if you’re gay, straight, black, white. When people point to a bar and ask me if it’s a gay bar, I tell them that it doesn’t matter. When I’m in it, it’s a gay bar!”