Each January for the past dozen years, the Florida Keys have hosted a group of severely injured soldiers who use special bicycles to ride segments of the Overseas Highway from Miami to Key West.

Called Soldier Ride and organized by the Wounded Warrior Project, the event raises public awareness and support for the needs of severely injured members of the military — primarily those who’ve been involved in Iraq and Afghanistan conflicts. It also provides rehabilitative opportunities and funds basic comfort items for wounded soldiers when they return to the U.S.

Along the highway, Keys adults and even school kids turn out to wave American flags and thank the soldiers for their sacrifices. 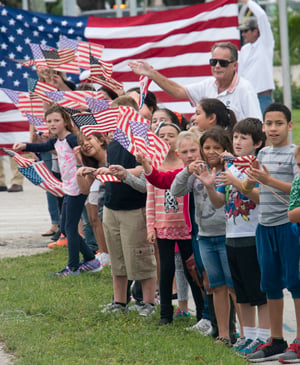 Elementary school students and their teachers greet injured military personnel as they travel down the Florida Keys Overseas Highway.

I’ve had the privilege of photographing Soldier Ride each year it has been staged in the Keys.

It’s not easy. Seeing men and women missing arms and legs, and knowing they lost them while defending America against terrorism, is very emotional for me. You think about how it has changed their lives and wonder how you could cope.

But the uplifting portion of the experience for me is seeing how the wounded warriors battle back from their traumatic injuries. Their attitudes are absolutely amazing.

Among the soldiers I’ve met is Army medic Rachael Rodgers. I watched her a few weeks ago as she interacted with dolphins at Marathon’s Dolphin Research Center. It was her second consecutive year participating in Soldier Ride.

Rachael lost part of her left leg, but it wasn’t in Afghanistan or Iraq.
She was bitten by a brown recluse spider in December 2013 at Fort Polk in Louisiana. She was treated to try to save her limb, and still had it when she was in the Keys last January.

“When I was here the last time, I still had my leg,” Rachael recalled. “It didn’t work very well and I actually had a harder time maneuvering around then, so I did not have much fun.” 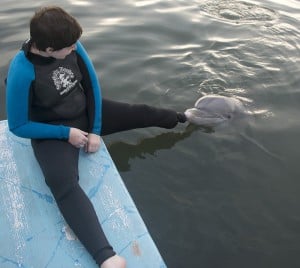 Despite months of treatment, in August 2015 Rachael had surgery to remove the affected portion of the limb. In January 2016, she participated in the Keys Soldier Ride again.

“To be in not as much pain this time around made a huge difference to me,” Rachael said after getting a kiss and a dorsal fin tow from Tursi, a female dolphin at the center. “I was able to enjoy it a lot more.”

I can’t imagine having my leg amputated — and Rachael saying that life was better afterwards just amazed me.

Now you might wonder why Rachael was part of Soldier Ride, since she wasn’t injured on the battlefield. Wounded Warrior Project spokesperson Nick Kraus answered that question for me.

“If Rachael had not been serving at Fort Polk, she likely would not have been bitten by the spider,” Nick said. “So it’s appropriate that we support her recovery.”

Rachael was particularly impressed by the wounded warriors’ reaction to the dolphins. 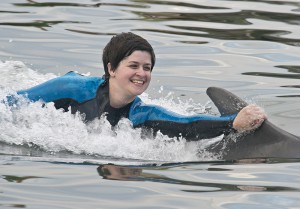 Rachael, who had her left leg amputated below the knee after being bitten by a brown recluse spider, gets a dorsal tow courtesy of Tursi the dolphin at Dolphin Research Center.

“I saw a lot of people open up,” she said. “Smiles erupt — everybody had a blast.”

She also appreciated the dolphins’ ability to provide almost custom therapy for participants whose injuries ranged from lost limbs to post-traumatic stress syndrome.

“I think the sensitivity is a big thing because they’re (the dolphins) so perceptive of the injuries and people’s swimming abilities,” she observed. “Especially for people with brand-new injuries who aren’t very comfortable in the water or are hurtin’.”

I’ve had the honor of photographing lots of smiling faces of wounded warriors at Dolphin Research Center and while they ride on the Seven Mile Bridge — but I will never forget photographing Staff Sgt. Brandon Dodson, who lost both legs after an Improvised Explosive Device detonated while he was on combat patrol in Afghanistan in 2014.

Brandon seemingly had the time of his life as he exchanged “flipper shakes” and kisses with Flagler the dolphin.

But it was an email I received from his sister Chris Dodson Miller a few weeks later — after she saw one of my photos that the Associated Press news wire carried to worldwide media — that really got to me. 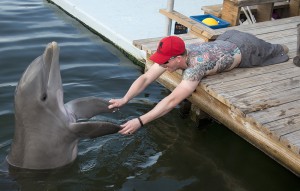 Brandon Dodson reaches out to shake the pectoral fins of Flagler the dolphin at Dolphin Research Center during the 2015 Soldier Ride.

Andy: Thank you for covering the Florida Keys Soldier Ride. The family of Brandon Dodson is grateful that someone is spotlighting the plight of many of our service members and only wish that everyone who has served was given the same opportunities that he received this week.

I would love to see the sports and entertainment world with their rock star salaries attempt to do even a portion of the work that our service people do for a minuscule salary.

Thanks again,
Chris Dodson Miller and the extended Dodson family

After I read the email, I cried … because Chris’s note reaffirmed how important it is to share the wounded warriors’ experiences in the Florida Keys.