Looking Back at Mallory Square

MALLORY SQUARE, 1980s. The late afternoon air smelled almost of anticipation on the crowded Key West pier, with a hint of saltwater blown off the Gulf of Mexico. Across the water lay Christmas Tree Island, fringed with scrubby trees and ringed with a necklace of liveaboard sailboats at anchor. 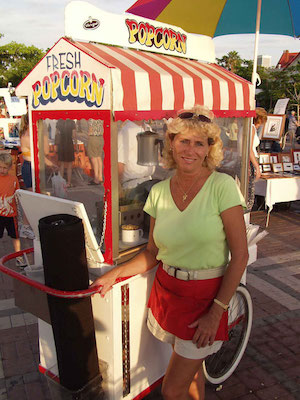 The savory smell of popcorn filled the air at Mallory Square, enticing visitors to enjoy the crunchy kernels offered by a blonde woman named Clara. (Photo courtesy of SunsetCelebration.org)

On the pier, a kilted bagpiper paced with steady rhythm as he piped. A cat performed intricate tricks and twirls under the direction of an exuberant Frenchman. A thin dark man sporting a long ponytail walked a tightrope, eliciting gasps and murmurs.

Guitar players, artisans displaying handmade wares, jewelry sellers and a woman hawking baked goods from the basket of a well-used bicycle stood out against the crowd.

People were everywhere — visitors and Key West locals, old and young, hippies and diamond-clad matrons, small children practically vibrating with excitement — all sampling the exotic banquet of faces, sights and sounds on the waterfront pier.

In 1973, emerging entertainer Jimmy Buffett had released his now-classic song “I Have Found Me a Home” about Key West. Early in his residence, Buffett absorbed the vibe of the offbeat island at the tip of the Florida Keys — whose history embraced pirates and shipwreck salvors and rumrunners, and whose inhabitants over the years ranged from literary legend Ernest Hemingway to renegade saloon-keeper Captain Tony Tarracino.

Key West changed a bit after Jimmy released the song, since not even an edge-of-the-continent paradise can remain the same. By the mid-1980s there was more traffic on rowdy Duval Street, and a faint sophistication blended with the free-and-easy mañana atmosphere.

But underneath, the island was still the same grand old lady she had always been — like an eccentric aunt who was sometimes slightly raucous, but always genuine in her warmth and welcome. And nothing exemplified that essential warmth more than the crowds of visitors, locals, street performers and vendors who gathered at the waterfront Mallory Square every night, glorying in life as the sun sank beneath the Gulf of Mexico horizon.

Most nights, a visitor to the Mallory Square Sunset Celebration would find the air heady with the breath of humidity and the fragrance of fat exotic blossoms. Saltwater and incense added to the musky perfume, and mismatched guitar chords drifted out over the water. 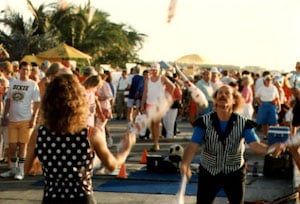 Bounce the Clown and his partner Ooo La La juggled and entertained crowds at the Sunset Celebration. (Photo courtesy of SunsetCelebration.org)

Dogs wandered the pier purposefully, as if on a mission, and parrots of all hues could be spotted on bicycle handlebars or the shoulders of 20th-century buccaneers. When, inevitably, the sun went down to the accompaniment of laughter and applause, the energy of the coming night could be felt strong as a pulsebeat.

In the afterglow each evening, people scattered. Some headed for Captain Tony’s ramshackle saloon not far from Mallory, while others drifted toward Duval Street to watch the world go by from restaurant balconies.

Many sought out Buffett’s favorite haunts or strolled through the tree-lined Old Town neighborhood, watching lights bloom in the windows of weathered Victorian houses.

Chances are, a good number of those veterans of the Mallory Square Sunset Celebration found themselves sitting, sunburned and satisfied, over a frosty margarita — feeling the same sense of belonging that prompted Jimmy Buffett to write, in his early anthem to Key West, “You can have the rest of everything I own, ‘cause I have found me a home …”