By Greg Tromba|2022-03-30T17:48:29-04:00March 9, 2022|
Teams propel decorated beds along Duval Street during a past bed race in Key West. The wacky annual fundraising event is a facet of the Conch Republic Independence Celebration that commemorates the Florida Keys’ 1982 “secession” from the United States. (Photo by Carol Tedesco, Florida Keys News Bureau)

Please set your alarm clocks for early afternoon April 23, when Key West’s 40th annual Conch Republic Blue Ribbon Bed Race is scheduled to “blanket” the island’s famed Duval Street. You definitely don’t want to oversleep and miss the zany event that’s billed as “the most fun you can have in bed with your clothes on.”

Not only does it provide hours of entertainment, but the bed race is also a fundraiser for the Sister Season Fund organization, which operates according to a motto that proclaims: “Locals helping locals, here to help when you need it most.” 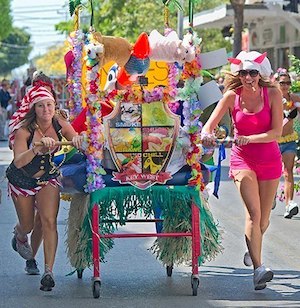 The organization provides financial assistance to hospitality- and tourism-related employees who are temporarily out of work because of illness, accident or a natural disaster. Since the charity’s inception in 2005, it has raised a whopping $1 million and helped thousands of residents who are integral to our island’s workforce.

The wacky competition features decorated beds (and this is Key West, so “decorations” can be offbeat indeed) mounted on wheels, trundling down Duval Street from Olivia to Southard streets. Teams of four runners, sometimes in outlandish costumes, propel each decked-out bed. Meanwhile, one lucky team member is designated to stay aboard (and take a quick snooze?). No motors are allowed, so it’s a “people-powered” competition only.

Event organizers have waived the usual entry fee this year, so both entering and viewing the challenge are free of charge. Check-in time for participants will be at 1 p.m., with a 3 p.m. “wake-up call” for the official start of the races.

So what’s the race procedure? First, there’s a lineup and inspection of the festive beds, followed by a parade of the bedazzled mattress-bearing vehicles. Then the action-packed “bedlam” gets underway, with teams pitted against each other as they pilot their beds in a fierce race to the finish line. Trophies and awards are presented around 6 p.m. for the first-place, second-place and people’s choice winners among others. The post-race awards ceremony is held poolside at one of my favorite watering holes, the Garden Bar behind the Bourbon St. Pub at 724 Duval St. 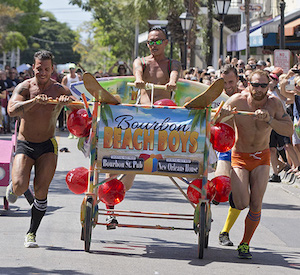 “Beach boys” race their bed along Duval Street during a past year’s competition. The event is billed as “the most fun you can have in bed with your clothes on.” (Photo by Rob O’Neal, Florida Keys News Bureau)

The race is one of the most popular events of Key West’s annual Conch Republic Independence Celebration. Now in its 40th year, the 10-day festival commemorates the Florida Keys’ symbolic 1982 secession from the United States and formation of the independent island republic. The republic (whose motto is “We seceded where others failed”) was born to combat a U.S. Border Patrol blockade of the Keys that caused miles-long traffic snarls and other mayhem.

The 2022 festival schedule features a ton of fun-filled “only in the Keys” events, and many take place in outdoor venues. So that provides a great reason to enjoy our fabulous April weather, with average daytime temps in the mid 70s to low 80s and low humidity.

The independence celebration runs April 15-24. Among its highlights are a ceremony commemorating the secession on its 40th anniversary, a lighthearted sea battle featuring tall ships, the so-called “World’s Longest Parade” that proceeds along Duval Street from the Atlantic Ocean to the Gulf of Mexico, a sailing race that recalls the Florida Keys’ maritime heritage and a “Conch Crawl & Pup Stroll” benefiting the Florida Keys SPCA.