Are you looking for some ways to chill out during the “dog days” of summer? If you’re like me, after a refreshing day at the pool, some indoor climate-controlled evening revelry is definitely in order. 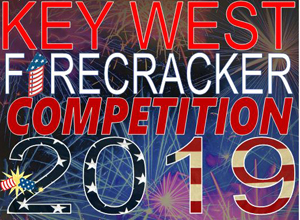 Much of Key West’s LGBTQ nightlife can found in or near our famed “Pink Triangle,” which includes a cluster of LGBTQ bars, entertainment clubs, and shops around the 700 and 800 blocks of the iconic Duval Street. The “Triangle’s” entertainment offerings may be hot, hot, hot, but the venues’ temperatures are always pleasantly chilled (yes, it’s true — Floridians do love to crank up their AC!).

On July 3, the stage of the Aqua Nightclub will be bursting with excitement as the 2019 Firecracker Competition kicks-off at 7 p.m., featuring dazzling drag performances by some of Key West’s drag elite.

This year’s festivities, presented by the Key West Mile Markers Club, are produced and hosted by last year’s winner, Shirley (a.k.a. Elle Taylor), along with lots of support from her cohorts Destiny Montgomery, Blue Diamond and Jessica Deveraux.

The show has a fascinating history. Picture this: on July 4, 1987, the Miss South Carolina Pageant was being held at a local nightclub. Then a competing “Gentlemen’s Club” (notice the quotation marks — wink, wink) decided it would present its own version of the show (with a splash of campiness, of course). Voilà, the Miss Firecracker Pageant was born. 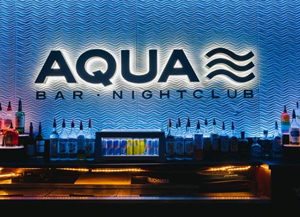 The popular Aqua Nightclub is the site of the 2019 Firecracker Competition.

The winning Firecracker performer was the late Charlie Powell, who played the role of “Charlene Sugarbaker” in salute to a character from the beloved TV sitcom “Designing Women.” (If you aren’t familiar with the show, you just may have to surrender your “Gay Card” immediately.) Powell, who relocated to Key West, reinvented the pageant in 1994, integrated drag performers — and, in true Key West fashion, turned over all proceeds to local nonprofit organizations.

This year’s proceeds will be equally distributed to seven amazing Florida charities including AH of Monroe County, Inc. and the Key West Mile Markers Team, who will ride bikes 165 miles from Miami to Key West in mid-November during the fundraising SMART Ride 16.

Each year entrants vie for victory in the competition, hoping to skyrocket to the Firecracker hall of fame. Both men and women are encouraged to enter and show off their true colors (red, white and blue, that is) during the sizzling night of entertainment.

No reservations are required for the Firecracker event and a suggested donation of $10 will be accepted at the entrance of the Aqua Complex, located at 711 Duval St. 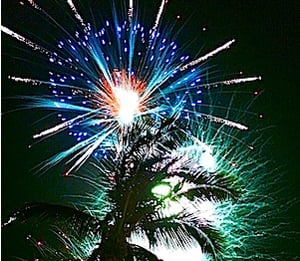 Fireworks are to light up the sky, and the palm trees, in Key West and around the Florida Keys on July 4.

On July 4, our holiday celebrations head outdoors for several events hosted by the Rotary Club of Key West, with proceeds benefiting the Rotary’s scholarship fund. The Independence Day events include a 5K Run/Walk at Edward Knight Pier (a.k.a. White Street Pier) with a 7:30 a.m. start time.

Would you like to get an up-close view of the fireworks, but are on a budget? Then head directly to the White Street Pier for the Rotary Club’s 3-9 p.m. July 4 celebration. The view is spectacular, there’s always lots of food and refreshments available for sale, and entry is free.

‘Wedding Crasher’ Offers to Rescue … Somebody