Immerse Yourself in Artistry at Fantasy Fest

By Carol Shaughnessy|2019-10-16T17:56:15-04:00October 16, 2019|
Revelers in a past Fantasy Fest Parade march up Duval Street in Key West. Known for its free-spirited pageantry, the extravaganza is also a showcase for artists of all sorts. (Photo by Rob O’Neal, Florida Key News Bureau)

Fantasy Fest, Key West’s annual masking and costuming festival, is rightfully famed for its outrageous party atmosphere. But it also offers a showcase for artists — illustrators who capture the festival spirit in poster and T-shirt designs, world-class body painters who use the human form as their canvas and, this year, a local talent exhibiting immersive graffiti-inspired images. There’s even a self-guided art and bar stroll. 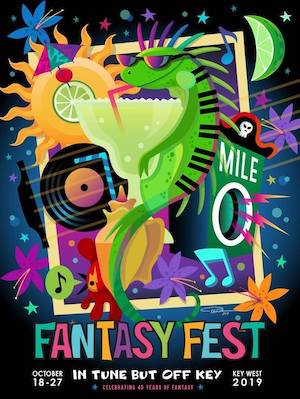 This year’s winner of the Fantasy Fest poster contest is Los Angeles’ Pashur, a pioneer of modern body painting known for his breathtaking full-body creations.

Visual artists contribute to Fantasy Fest in a wide variety of ways. For example, each year festival organizers and the Florida Keys Council of the Arts issue a call to artists to submit designs for the festival’s official poster and T-shirt.

This year’s winner for both is Los Angeles’ Pashur, a pioneer of modern body painting known for his breathtaking full-body creations. He will appear at Fantasy Fest (for the 16th year!) to paint “living canvases” at Paradise Tattoo at 627 Duval St.

Pashur has traveled around the globe doing body-painting projects for clients including Cirque du Soleil, singer Nicki Minaj and Toyota. For Fantasy Fest, inspired by the festival theme “In Tune But … Off Key,” he created a design featuring musical elements, an exuberant color palette and Key West imagery that ranges from the infamous Mile Zero sign to a stylized conch shell.

Pashur will star at the arts council’s official poster-signing party at Paradise Tattoo starting at 1 p.m. Friday, Oct. 25.  Admission is free — and his gorgeous posters will be available for sale.

Festival goers also can meet and be a “canvas” for Hollywood celebrity makeup artist “Captain” Ron Wolek (yes, really you can!). Captain Ron will offer his custom artistry in hair, makeup and body design in the Beauty Garden next to Fairvilla at 524 Front St.

This is a chance not to be missed, since he’s widely acclaimed for his work on television’s “Stranger Things” and “The Vampire Diaries” as well as dozens of other television series, films and theater productions. His career credits also include a long tenure at Disneyland and work as a creature sculptor and designer at SeaWorld Parks & Entertainment.

Appointments for “glitter and glamor” treatments with Captain Ron and his stellar crew are available between 11 a.m. and midnight Oct. 20-26. 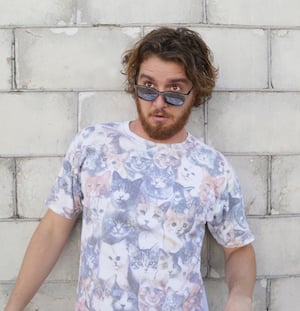 Also on hand will be the crew from Wonderdog Studios, masterminds behind Fantasy Fest’s vivid graphics and creative spirit, who will turn the gallery into a workshop for fantasy costumes, props and other design delights.

“Master Slacker” will be on view through Oct. 28.

And for those who like cocktails with their culture, Fantasy Fest features a special treat: the BART bar and art crawl of the Key West Historic Seaport.

The self-guided tour, one of the festival’s “daily diversions,” is an exploration of establishments, sculptures — including some by internationally renowned talent John Martini — and unexpected or pop-up artistry between Duval and Grinnell streets.