By Carol Shaughnessy|2021-07-28T12:04:50-04:00July 28, 2021|
Zach Taylor, center, surrounded by past winners of the Hemingway Look-Alike Contest, beams as he hoists a bust of Ernest Hemingway after winning the 2021 contest at Sloppy Joe’s Bar in Key West. Past winners include Joe Maxey, left front, the 2019 winner, and 2018 winner Michael Groover, right front, the husband of celebrity chef Paula Deen. The 2021 competition featured 137 contestants and was the cornerstone event of the annual Hemingway Days festival that honors writer Ernest Hemingway, who lived in Key West for most of the 1930s. (Photo by Andy Newman, Florida Keys News Bureau) 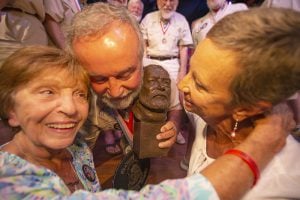 An electrical and plumbing supply company owner from Ambrose, Zach triumphed over 136 other entrants to earn the title of “Papa” — the nickname Hemingway adopted for himself.

Zach likened the look-alike contest to a “family reunion,” particularly after the cancellation of the 2020 competition because of the coronavirus pandemic. His victory was especially meaningful since his late father-in-law Carlie Coley won in 2000.

“Hemingway has been a fixture of ours since we started coming down to the contest,” explained Zach, whose wife Sheryl and mother-in-law Bennie Nell Coley were on hand to help celebrate his success.

As well as having a Hemingwayesque appearance, with piercing eyes and a healthy beard, Zach said he shared the author’s passion for fishing, hunting and the life of an outdoorsman.

Look-Alike Contest entrants were judged by past winners at Sloppy Joe’s Bar, a watering hole frequented by Hemingway, as they paraded onstage and took turns attempting to prove that they best represented the author who loved Key West. 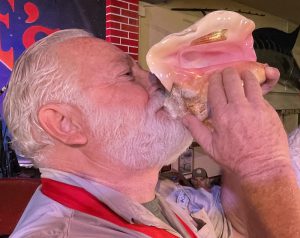 David “Bat” Masterson toots a conch shell, the symbol of the Florida Keys, as part of his plea to win the 2021 Hemingway Look-Alike Contest. (Photo by Andy Newman, Florida Keys News Bureau)

Some even sang or recited poetry as they pleaded for victory. Saturday night’s finalists included seven-time competitor David “Bat” Masterson (a former winner of Key West’s Conch Shell Blowing Contest), who accompanied a self-penned tune on the harmonica and conch shell.

Hemingway Days honors the literary legacy and vigorous lifestyle of the author, who produced “For Whom the Bell Tolls,”  “To Have and Have Not” and other classics during his Key West years.

He also participated in vigorous sporting activities that included pursuing marlin in Florida Keys waters and refereeing boxing matches at what is now the popular Blue Heaven restaurant — as well as meeting friends for drinks and lively discussions at Sloppy Joe’s.

“You know, everybody has read ‘The Old Man and the Sea’ and things like that, that he wrote, but coming down here, you start to see bits and pieces of a man you knew nothing about,” Zach said after his win was announced. “I think Papa would be proud of what’s been accomplished in his name in a town he loved so well.”

In addition to the Look-Alike Contest, Hemingway Days events included a zany “Running of the Bulls” that must be seen to be believed, the three-day Key West Marlin Tournament and a short story competition directed by Hemingway’s author granddaughter Lorian Hemingway. 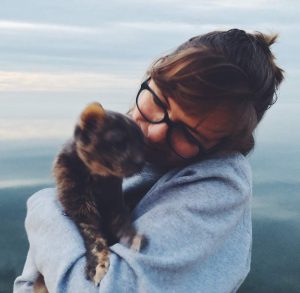 Madison Bakalar, winner of the Lorian Hemingway Short Story Competition, shares both literary talent and a fondness for felines with Ernest.

Her story “So This Is How We Go” was named the finest among 785 entries submitted by writers from around the United States and around the world. The story chronicles an approaching global catastrophe and its effect on a solitary young woman.

“It speaks to what the world has been through in regard to isolation,” said Lorian Hemingway, who founded the renowned short story contest 40 years ago and has directed it ever since. “It’s emotionally accessible without going over the top.”

According to Lorian, the entry particularly impressed the judges for its ability to combine universally human emotions about loss with a finessed gallows humor.

Heartfelt congratulations to Zach Taylor and Madison Bakalar — one who looks like “Papa” and enjoys similar outdoor pursuits, and one who shares his passion for telling meaningful stories in a uniquely evocative way.

Thanks to them, and to everyone else who participated in the contests or celebrated Hemingway Days, Ernest Hemingway’s legacy lives on in Key West.