Friends Who Cook Together Own Azur Together 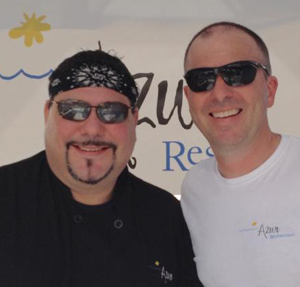 Michael Mosi (left) and Drew Wenzel have been welcoming guests to Azur for more than a decade. (All photos courtesy of Azur Restaurant)

Drew, with family roots in Germany, and Michael, of Italian and Hungarian heritage, met while attending Penn State University during the mid-1980s — when they were chefs in an American-style restaurant, the Allen Room, at the Hotel State College.

“For about three days we sized each other up,” Drew said, recalling tense competition as “alpha” chefs. “Finally, we realized we could learn something from each other.”

That decision shaped the course — and menus — of their lives.

“We spent a lot of time trying to figure each other out,” Michael admitted. “I’m a much more passionate and reckless kind of guy. Drew was more methodical and calculating. That’s the reason our partnership works so well.”

“I went to Germany to complete my chef’s apprenticeship and Mike traveled across Europe,” Drew said. “I wanted to follow my passion and work on cooking rather than push a pencil.”

Travels throughout Europe, South Africa, Thailand, Greece and the Netherlands helped Michael solidify his skills as a “purist when it comes to technique, ingredients, regionality and history of food and culture.” 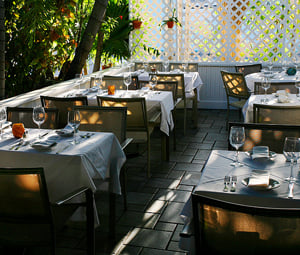 Guests can savor menu specialties on Azur’s shady terrace or in the gracious main dining room.

In 1994 the pair opened the 100-seat Graceland restaurant in Hamburg, Germany, serving up authentic U.S. southern-style cuisine influenced by Tidewater, Floribbean and Cajun-Creole trends of the time.

Michael traveled frequently to Italy and still visits family in the Tuscan town of Pistola, honing his Italian cooking skills. Drew split his ownership of Graceland in 2002.

After a short stint working a German wine festival, Michael ended up in Key West, lured by the visionary owners of Antonia’s restaurant, and convinced Drew to join him.

Various other stints around the Conch Republic led to a call in 2006 from Eden House owner Mike Eden, who was seeking a redo of his then-defunct Cafe Med restaurant.

“We decided we should take all of our travels and all of the things we loved about food in Europe and be a coastal European restaurant,” Michael said. “Twelve years later, we’re still inventing.”

Azur, a 1,400-square-foot, 60-seat venue with a staff of 16 at the corner of Grinnell and Fleming streets, attracts loyal patrons on Sundays and busy evenings. 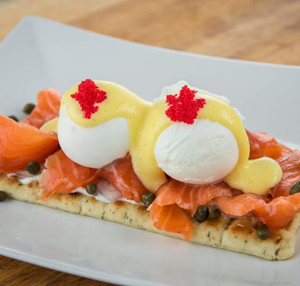 This luscious “Bennie” is just one of Azur’s signature brunch dishes.

Ingredients such as fresh yellowtail or tripletail snapper and lobster are sourced locally, while octopus and fresh branzino come from Greece.

“Our food is the essence of our experience from throughout the world,” Drew explained.

Both in their mid-50s, Michael and Drew spend their limited spare time living the island life and discovering what other local chefs are creating.

“The culinary community is very tight here,” Drew said. “The culinary scene in Key West is exciting — it pushes us.”