Fort Jefferson: Echoes of the Past

He was desperate when he wrote the poem, and his desperation lingers in the lines more than 150 years later. He had every reason to despair, imprisoned in Fort Jefferson — America’s largest and most remote coastal fortress — on the tiny Dry Tortugas islands 68 miles west of Key West in the Gulf of Mexico. 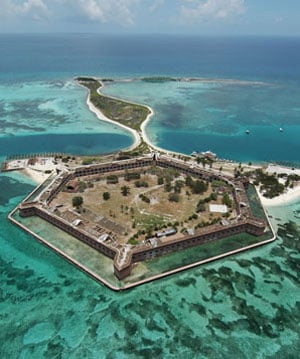 One night, after another day of forced labor under the blazing sun, Union Army Private Thomas Moran sat in his cell by candlelight and spilled his soul out onto a scrap of paper.

His poem was addressed to Major General Nathaniel Prentiss Banks, commander of the Union’s Department of the Gulf. It outlined Private Moran’s wartime service and undeserved incarceration, and contained a wrenching plea for freedom.

“I fear not the duty/Nor battle’s loud strife/But I care on Tortugas/To pine off my life,” the poem reads in part. The urgent refrain rings as compellingly today as it did when Moran wrote it: “My voice from Tortugas I ask you to hear.”

Private Moran’s is hardly the only voice that has cried out from Tortugas over the years. Fort Jefferson, begun in 1846 but never finished, housed numerous soldiers and prisoners whose journals and letters provide a vivid picture of life on the barren coral-and-sand islands.

Among them was Sergeant Harrison Herrick of the 110th New York Volunteers, who penned spare and unvarnished diary entries: “Friday May 6th. In the morning while the prisners on the Thames were comming ashore one of the guards, one of the 1st Del Artillery shot himself through the head he was crazy wether fair & plesant.”

No voice from Tortugas rings more lastingly than that of Dr. Samuel Mudd, imprisoned after being convicted of conspiracy in Abraham Lincoln’s assassination. His only tangible “crime” was setting assassin John Wilkes Booth’s broken leg.

“We are still in irons,” Mudd wrote in December of 1865, “compelled to wash down six bastions of the Fort daily. However, we are allowed to purchase articles of food, etc.” 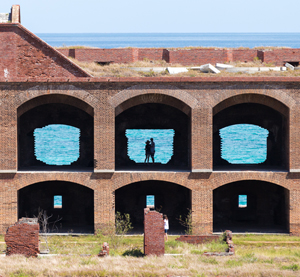 Fort Jefferson’s most famous prisoner was Dr. Samuel A. Mudd, who was imprisoned there after being convicted of conspiring to assassinate Abraham Lincoln. (Photo by Laurence Norah, Florida Keys News Bureau)

Later, Mudd was released following a yellow fever epidemic when he treated and saved the lives of stricken soldiers. His captors were so impressed that they petitioned President Andrew Johnson on his behalf.

Since the Dry Tortugas area became a national park in 1992, scores of voices have been heard from its shallows and islands — those of park rangers, historians, divers, naturalists, birdwatchers and writers.

A trip to the Tortugas takes visitors into a realm largely untouched by modern civilization, yet unmatched in historic and natural wonders.

Eventually the Dry Tortugas appear, low against the horizon. These seven undeveloped islands were named Las Tortugas (The Turtles) by explorer Ponce de Leon in 1513.

They soon became known as “Dry Tortugas” because they had no fresh water.

On Garden Key stands the 19th-century fort. Its construction began after American leaders realized that fortifying the Tortugas was vital in controlling navigation in the gulf.

During the Civil War, the fort was a Union military prison for captured deserters. The Army abandoned it just a few years later. 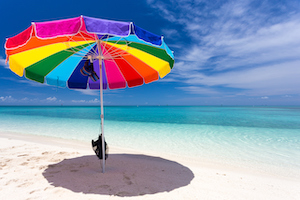 In 1908 the area was designated a wildlife refuge. Named Fort Jefferson National Monument in 1935, it was later proclaimed Dry Tortugas National Park to protect its natural richness. Nearly 300 species of birds have been sighted there, drawing thousands of birders each year.

Entering Fort Jefferson, centered on an island hardly larger than its exterior walls, is like stepping back 150 years. Six-sided and constructed of 16 million bricks, its three levels loom up against the sky.

Visitors can take a complimentary guided tour of the fort: stepping inside Dr. Mudd’s cell to feel the prison chill, peering through the gun casements, observing the panorama of sea and sky from the structure’s open third level.

Afterward they can picnic, swim and snorkel in the crystalline waters, laze on the secluded beach or stroll along the moat surrounding the fort.

Around mid-afternoon, ferry passengers begin the return journey to Key West. On the way back, they might spot frolicking dolphins, observe soaring seabirds, or reflect on the lives of Private Moran, Sergeant Herrick and Dr. Mudd — and all the others whose voices still echo from the Tortugas fortress lost in the past.