By Carol Shaughnessy|2021-03-24T10:57:17-04:00August 29, 2018|
Dana Haynes (right) shoots a selfie with Scarlett the flamingo at the Key West Butterfly & Nature Conservatory. Dana and other visitors enjoyed an up-close visit with Scarlett and her cohort Rhett during one of the conservatory’s “Flamingle” encounters. The birds cannot be touched during the once-a-day experience, and choose whether they want to interact with humans or not. (Photo by Rob O’Neal, Florida Keys News Bureau)

How does it feel to a have an up-close and personal encounter with two exotic pink flamingos? Nature lovers can find out during the exclusive “Flamingle” experience at the Key West Butterfly & Nature Conservatory — believed to be the only butterfly facility in the entire United States that also houses flamingos. 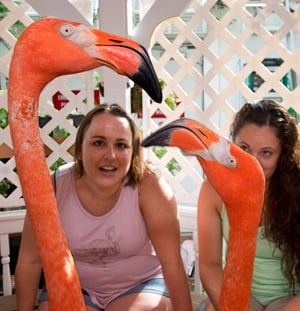 “Flamingle” is the latest offering at the popular conservatory, a 5,000-square-foot glass-domed rainforest-like habitat where visitors can stroll among some 1,000 butterflies from 50 to 60 species.

Guests also can observe a lively population of birds from about 20 species, and learn about butterflies’ stages of development, life cycle and role in the natural world. The conservatory’s motto is “excite your senses, expand your mind” — and the multi-sensory “Flamingle” experience certainly does both.

The flamingos, a male and female breeding pair now six years old, are called Rhett and Scarlett in honor of their coloration and obvious affection for each other. Coincidentally, since the species is often associated with love and romance, the prized wading birds were born on Valentine’s Day 2012.

They arrived at the Key West facility in July 2013 — and as they grew, their colorful pink plumage, social nature and foot-patting “dance” in their wading pond made them visitor favorites. (In fact, they’re resident celebrities whose Facebook videos have been known to draw bigger audience numbers than some reality stars’ videos!)

“Rhett and Scarlett have very unique personalities,” said George Fernandez, the CEO of the conservatory and a doting “dad” to the two flamingos. “I will say that Rhett, as the male, has the alpha mentality — but they’re inseparable.”

During the hour-long “Flamingle” encounter, human participants sit in a picturesque white gazebo overlooking the pond and lushly planted conservatory. Rhett and Scarlett walk free and interact as they choose.

“We have had people here literally in tears at the response that they get in mingling with the flamingos,” recalled George. “The experience will hopefully teach them to not only respect nature, but to love nature and to understand what an incredible world we have.”

The flamingos often play with guests’ hair, respond to human chatter with loud cries and spread their graceful coral-pink wings. Though participants aren’t allowed to touch the birds, they are encouraged to communicate, socialize and enjoy the magic of the inter-species interaction. 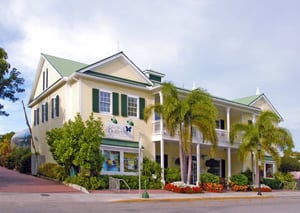 “Flamingle” is offered at 4:45 p.m. daily and is limited to six guests. And it’s hard to tell who takes more pleasure in the unique encounter — the flamingos or the people.

“I think it’s both, because we have people here who are enamored with flamingos,” George said. “This is a special, special privilege for them to sit there and bond with an animal they obviously love and admire.”

FYI, the conservatory — Rhett and Scarlett’s home — is one of three major butterfly facilities in Florida and just 23 in the entire United States.

So if you’re interested in walking among the winged creatures called “flowers of the sky,” or experiencing an unforgettable “mingle” with flamingos, put the Key West Butterfly & Nature Conservatory on the must-see list for your next trip to Key West.