Summerland Key resident Dave Vaughan, founder of the Plant a Million Corals Foundation, is known worldwide for his “Eureka mistake” that led to a revolutionary coral fragmentation technique that enables the rapid growth of coral.

His technique is proving to be a vital tool in restoring and protecting the Florida Keys’ living coral barrier reef. 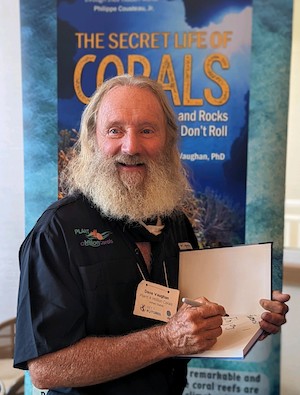 Dave shares his longtime expertise in coral restoration in his new book, titled “The Secret Life of Corals: Sex, War, and Rocks That Don’t Roll.”

Dave is the pioneer of “micro-fragmentation” — the fragmenting or cutting of coral into small pieces of polyps. The process stimulates the rapid growth of coral tissue.

Throughout the Keys environmentalists, divers, citizen scientists and other volunteers are racing to replant resilient coral to replenish the only living coral barrier reef in the continental United States through Mission: Iconic Reefs. The mission is an unprecedented effort to restore nearly 3 million square feet of the Florida Reef Tract at seven Keys reef sites.

Dave’s Plant a Million Corals’ land-based initiatives include development of transportable coral “nurseries in a box” (a 20-foot refrigerated shipping container) at the 4-acre bayside Summerland Farms. He ships the portable nurseries to exotic islands such as Mo’orea in French Polynesia, the Maldives and Puerto Rico and conducts about a week’s worth of training on-site.

Plant a Million Corals hopes to reduce the cost of replanting of each coral to $1, compared to $10 to $250 per coral currently spent by other nonprofit organizations. Dave’s foundation is funded through private donations and other foundations.

The scientist is also an author. His new book, “The Secret Life of Corals: Sex, War, and Rocks That Don’t Roll,” released in mid-November, is available at Amazon, Barnes & Noble and locally at Lower Keys Bait & Tackle and the National Key Deer Refuge Nature Center. 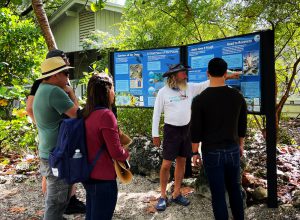 Dave presents information at the headquarters of his Plant a Million Corals Foundation.

Dave Vaughan: In 1975 I accompanied a research group to visit the (University of Miami’s then existing) Library of Seaweed at Pigeon Key.

DV: The coral reefs providing protection for our community, food for our families and jobs for our economy. Our light green flats and deep blue ocean, where fishermen share their love of the water, and the mangrove forests keeping our inshore coastline in place all depend on the coral reefs.

DV: Growing up I was fascinated with Jacques Cousteau and his undersea world. His work motivated me to pursue marine science. While working for Mote Marine Laboratories in Sarasota, I was inspired by two founders, Eugenie Clark and Sylvia Earle, who influenced me to move to the Keys and help with their coral restoration efforts.

DV: I came to the Keys to work with coral research, but here I discovered technology used all over the world to grow and restore corals at 25 to 40 times faster than they would normally grow. Our facility, solar powered and off the grid, is developing ways to make coral restoration accessible and affordable to technicians and communities all over the world. It’s a global education, training and production hub for restoration — with a capacity of producing 1 million corals per year within two years. 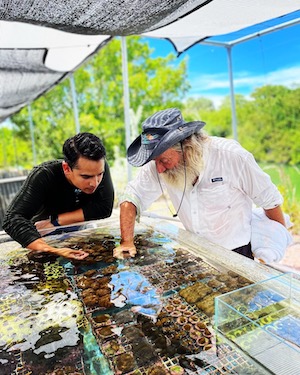 Dave’s micro-fragmentation technique enables the rapid growth of coral and provides new hope for reefs around the world.

DV: Through my commitment to the coral reefs, here and internationally.

DV: Hope! At my start in coral restoration, we would almost need therapy at the end of meetings because the technology was so slow. When I discovered micro-fragmentation, we realized that with all the stressors on the reef, we now had a tool that would bring that timeline into months and years.

DV: Being on or in the water! I love to take our solar-powered dingy out on weekends and cruise over the sponge beds in front of our cove.

DV: Environmental action in coral restoration will also trigger a reverence for the environment. Our kids can see the kind of Florida Keys life that I’ve been able to experience and enjoy.

DV: Coral reefs are awesome. There is HOPE.