By Carol Shaughnessy|2020-11-04T18:07:05-05:00November 4, 2020|
Key West’s local poultry population, like this majestic rooster, is a colorful, quirky part of the island’s unique vibe. Some years back, the wandering fowl even inspired their own feathered festival. (Photo by Rob O’Neal)

A while back, longtime Key West resident Penn Alexander realized something had gone badly wrong with the balance of nature in his Old Town neighborhood. 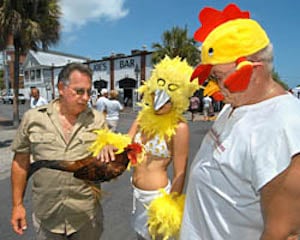 The realization came while he was listening to classic rock in his hundred-year-old cottage. As the music flowed around him, Penn glanced down at the plastic cat carrier that housed a wounded Key West chicken he’d rescued from a marauding hawk. There on top of the crate snoozed his large orange tabby cat, Charlie, who was clearly uninterested in the feathered inhabitant and what should have been their predator/prey relationship.

In Key West, however, most relationships involving chickens transcend traditional boundaries. The island’s indigenous poultry, probably descended from roosters bred generations ago for cockfights and hens kept for eggs, roams historic Old Town at will. Private cars and taxis stop to let chickens and their babies cross the road, visitors coo and cluck as they snap photos of the meandering fowl, and roosters can be heard crowing not just at dawn, but whenever they feel like it.

While most Key Westers accept the chickens as part of the eccentric island they love — and some, like Penn, shelter and nurture them — a few anti-poultry proponents claim the population is too noisy and growing too fast.

Some years ago, in fact, city officials hired a chicken catcher to round up and relocate almost half of the city’s estimated 2,000 birds to a mainland farm. Armando Parra, a third-generation island resident, barber and amateur ornithologist, caught eight chickens in humane traps during his first day on the job — but his new career was thwarted by the efforts of poultry lovers, who freed trapped fowl at every opportunity. 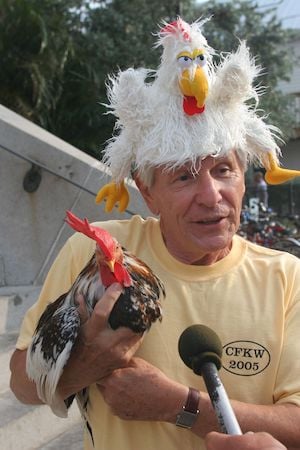 Joe Liszka, shown here with an unnamed feathered friend, was a proud supporter of ChickenFest. (Photo by Rob O’Neal)

The resultant commotion led to (I am not making this up) a four-day festival that was quickly dubbed ChickenFest — hatched by a local event coordinator to give chicken lovers something to crow about.

The highlight was a Poultry in Motion Parade that featured 10-foot-tall dancing chickens, a Colonel Sanders look-alike, a flock of renegade roosters staging a “coop d’etat” against hapless humans, and a 12-foot “Chicken Caesar” — a toga-wearing rooster reclining on a chariot-drawn chaise and waving a regal wing to parade spectators.

In the face of that kind of egg-citement (sic!), the poultry population’s “hard-boiled” detractors didn’t stand a chance.

Today, although ChickenFest is no longer held, chickens still rule the roost in Key West. The island’s hens and roosters have become the subject of oil paintings and watercolors, giant sculptures in local pocket parks and locally published children’s books.

If you’re seeking chicken companionship during a visit to the island, stop by Key West’s funky Blue Heaven, a renowned eatery whose fans include famed singer/songwriter Jimmy Buffett. Blue Heaven’s  “breakfast with the roosters,” served in an outdoor courtyard where resident hens and chicks wander freely, features items ranging from lobster and shrimp benedicts to sinfully good homemade pancakes and banana bread.

Or, if you happen to know Penn Alexander, just head over to his place in Old Town. The little hen he rescued, now named Henrietta, has become a pet whose daily treat is a smidgen of cat food filched from Charlie the orange tabby.

The cat doesn’t seem to mind a bit.