Divers and ocean enthusiasts are invited to celebrate the 20th anniversary of the sinking of the third-largest vessel ever intentionally scuttled to become an artificial reef — the retired 510-foot Navy Landing Ship Dock Spiegel Grove, which lies 6 miles off Key Largo. 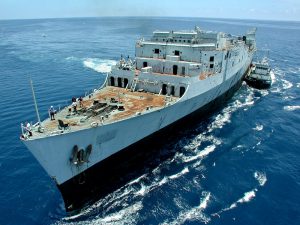 Tugboats nudge the retired U.S. Navy ship Spiegel Grove, a 510-foot Landing Ship Dock, into a final anchoring position in May 2002 after it arrived off Key Largo to be sunk as an artificial reef. (Photo by Andy Newman, Florida Keys News Bureau)

Scheduled May 15-17 in the Florida Keys, the celebration includes a planned morning dive on Spiegel Grove Sunday, May 15. During the dive, participants will place a commemorative plaque on the ship’s hull to honor the men who served on the historic vessel.

Qualified divers can make a reservation by contacting Lisa Mongelia, director of Islamorada’s History of Diving Museum, at 305-664-9737 or  director@divingmuseum.org.

The museum, located at mile marker 82.9 bayside in Islamorada, has launched a monthlong pop-up exhibit about Spiegel Grove in its research library — where people can learn about the wreck and its fascinating heritage through May 31.

And on May 17 — the 20th anniversary of the ship’s sinking — audiences can enjoy “Celebrating the Spiegel Grove at 20: A Saga Too Strange Even for Hollywood!” at Key Largo’s Murray Nelson Governmental and Cultural Center at mile marker 102. A multimedia presentation and panel discussion, the evening will feature members of the original “sink team” chronicling the intriguing history of Spiegel Grove.

In fact, the tale of the ship’s journey from the ocean’s surface to the sandy bottom 130 feet below is as compelling as its size — with twists and turns that would be hard to believe even in a Hollywood blockbuster.

The sun sets over the upside-down hull of the Spiegel Grove in May 2002 after it sank prematurely and rolled over. (Photo by Andy Newman, Florida Keys News Bureau)

On May 17, 2002, as Spiegel Grove underwent final preparations for its planned sinking, it began to rapidly take on water, prematurely sank and rolled over. The team of workers scrambled to safety and mercifully escaped injury, but the ship’s roll left its upside-down bow protruding above the Atlantic Ocean’s surface — where it was quickly deemed a navigational hazard by the U.S. Coast Guard.

The story, however, captured worldwide media attention. Spiegel Grove became a world-renowned artificial reef even before the first recreational diver explored it.

Some three weeks later, on June 10, 2002, a salvage team sank the vessel fully and it came to rest on its starboard side — not the position originally anticipated, but an acceptable alternative. Almost immediately attracting reef fish and marine growth, the enormous ship officially opened to divers June 26, 2002. Underwater enthusiasts flocked to the new artificial reef’s cliff-like hull sprawled across the sandy bottom.

But the Spiegel Grove saga wasn’t over yet. In early July 2005, Hurricane Dennis brushed the Florida Keys with tropical storm-force winds and left an amazing gift for the sport-diving community. 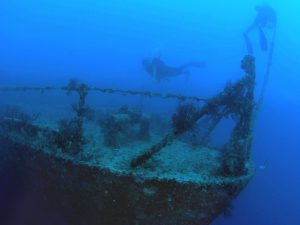 Divers swim on the Spiegel Grove in July 2005, after discovering that the ship had rolled upright, apparently courtesy of waves spawned by Hurricane Dennis off the southeast coast of Cuba. (Photo by Frazier Nivens, Florida Keys News Bureau)

After the storm passed, divers discovered the vessel in an upright position — the position artificial reef project organizers originally intended. According to a meteorologist at the Florida Keys’ National Weather Service office, when the storm was east of Cuba, it generated powerful currents that migrated up the Florida Straits and shifted the massive ship.

Today, the top deck of Spiegel Grove is about 60 feet below the surface of the ocean. The ship is so wide that, on many days, the view of the superstructure fades into a green-blue abyss. On the clearest days, the sandy bottom is visible nearly 130 feet from the surface. Mooring buoys provide convenient, coral-friendly boat tie-offs.

If this incredible tale awakens a craving for Keys waters, then check out another aspect of the celebration: the May 17 kickoff of a “Spiegel Grove 20th Anniversary Dive Trip Giveaway.” The prize includes a three-night Key Largo trip, valued at over $2,500 and including accommodations, to dive the famous wreck.

The contest entry page link will be published in posts on the Florida Keys’ Facebook page and appear below the bio (@thefloridakeys) on Instagram and Twitter. The trip giveaway entry period begins at 9 a.m. EDT Tuesday, May 17, and continues through 11:59 p.m. EDT Tuesday, May 31.