Betsy and the Naked Chefs

By Carol Shaughnessy|2021-08-11T15:25:14-04:00August 11, 2021|
Many Keys residents and visitors are obsessed with the tasty spiny lobsters found in the island chain’s waters. Here, artist Sandy Guthrie, right, fits Christian Arias with a lobster cap during a past celebration of the sensational crustacean. (Photo by Rob O’Neal, Florida Keys News Bureau)

The largest lobster in the Florida Keys is named Betsy, and she’s 30 feet tall and 40 feet long. But you won’t spot her rampaging through the island chain like a crustacean King Kong — because Betsy, though more or less anatomically correct, is a sculpture. 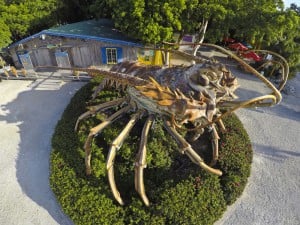 Islamorada’s “Betsy” just might be the world’s largest lobster sculpture. Standing outside the Rain Barrel Village, the supersized crustacean elicits double-takes and smiles from passersby. (Photo by Bob Care)

She’s a sculpted Florida Keys spiny lobster, to be exact, crafted in the 1980s by local artist Richard Blaze. An iconic and much-photographed landmark, she greets visitors to the Rain Barrel Village artists’ enclave in Islamorada.

FYI, Keys lobsters are quite different than their northern cousins. For one thing, they don’t have claws. Even more important, their meat has a slightly chewy sweetness that Maine lobsters can’t hope to emulate.

The most popular way to serve our luscious lobster is grilled with melted butter — or, like its Maine cousin, steamed or boiled. While traditional northern trimmings might include boiled potatoes and corn on the cob, it’s not unusual to find Keys lobster paired with Cuban black beans and yellow rice. You can also order it baked and stuffed, in sinfully rich bisque, or cold in refreshing salads.

The Keys’ lobster season began Aug. 6 and continues through March 31, so there’s plenty of time to enjoy the seafood sensation at local restaurants. 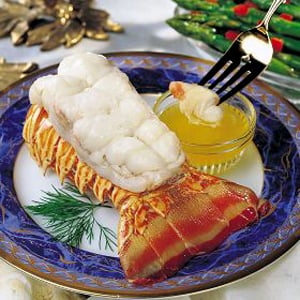 Or, if you have your own stash of lobsters and want to experiment a little, try the following easy-to-prepare treats.

LOBSTER DEVILED EGGS: Hard-boil six eggs, let them cool and cut them in half lengthwise. Finely dice the steamed meat from one spiny lobster. Mix it with the egg yolks, mayonnaise to taste, and a pinch each of powdered mustard and paprika. Stuff the mixture into the egg whites and serve as hors d’oeuvres (you should have some lobster-and-yolk mixture left over to spread on crackers — yum!).

LOBSTER CHEESE TOAST: Cut a six-inch wedge of fresh Cuban or Italian bread and cut the wedge in half lengthwise. Toast both halves. Meanwhile, cut the steamed meat from one Keys lobster into chunks. Spread the toasted bread with mayonnaise and Dijon mustard. Top it with lobster chunks and shredded Vermont cheddar cheese, and broil briefly until the cheese is slightly bubbly. This serves one or two for lunch, depending on appetite.

LOBSTER CAPRESE SALAD: Slice two large tomatoes into four or five slices each and arrange them on two plates. Top the slices with crumbled feta cheese, the chopped meat from a large steamed spiny lobster, and chopped fresh basil leaves. Drizzle each salad with olive oil and squeeze lemon juice over it to taste. This serves two for lunch (or, if you use two lobsters instead of one, it can serve two for a warm-weather dinner).

While Florida lobsters aren’t typically accompanied by buns, buns were surprisingly visible during an event staged many years ago to celebrate the beginning of the Keys’ lobster season.

The Naked Chefs Lobsterfest featured live music, an open-air setting overlooking the Atlantic Ocean, and lobster with all the trimmings — prepped and served by male and female chefs who were indeed naked.

Luckily, 30-foot-tall Betsy wasn’t on hand during the offbeat feast.

And while attendees raved over both the crustacean cuisine and the “buns,” nearly everyone agreed that — given the chefs’ state of undress — it’s fortunate that Keys lobsters have no claws!