These Shoes Were Made for Sprinting: Key West’s Zany High-Heeled Drag Race

Spring has sprung in Gay Key West, with visitors frolicking around the island and enjoying our fabulous sunny days with temperatures in the 80s. We locals sometimes grumble if it’s “too cold” or rainy — and then the visitors coming from cold and snowy locales politely remind us what their weather is like back home. 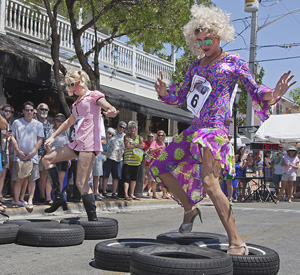 We sometimes forget how very fortunate we are to live in a balmy subtropical paradise (unless we’re glued to the Weather Channel).

Spring’s arrival also means it’s time for one of our incredibly entertaining events: the Great Conch Republic Drag Race, where female impersonators and “pit crew” members transform the 700 and 800 blocks of Duval Street into an improvised “drag” speedway under the direction of event host Bourbon St. Pub.

The quirky challenge features “dragsters” from across the island sporting their highest heels and racing attire while sprinting from Petronia to Angela streets. It’s definitely one of those “only in Key West” events!

The race will be held Saturday, April 20, with a zany “racetrack” that includes an impressive speedway, starting gate, pit stops, finish line and spectator viewing areas.

After a test run of the course, participants vie one-on-one until the two fastest drag racers reach the finals and battle for the grand prize trophy. The first qualifying heats will be around 2 p.m. with finals around 5 p.m. (times may vary depending on hair and makeup requirements).

The offbeat auto-racing spectacular features race officials and an island DJ, who fills the air with the sound of air horns and revving engines. (The sound effects actually do get your adrenaline pumping!) However, the spectators’ focus is generally on the hilarious drag performers who test their high-heeled sprinting abilities on the raceway (with lots of makeup and flawlessly coiffed wigs, of course).

“We have a lot of spectators every year coming out to see men running in heels and competing for an awesome trophy and prizes,” admitted event organizer Joe Schroeder, proprietor of the Bourbon Street Complex. 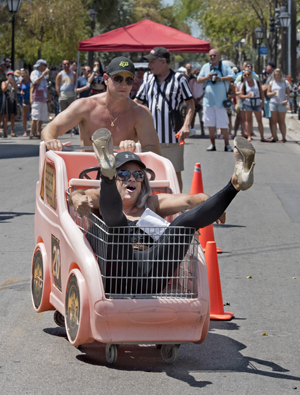 The action gets increasingly intense as the “dragsters” zoom down the street past their rivals while trying to avoid overheating their engines or suffering a high-heel blowout. (Instead of shredded tires, you might see a few lost wigs and broken heels along the sidelines.)

Audience members cheer for the racers as they attempt to navigate various hazards including tires, traffic cones and whatever else the event organizers dream up.

Then, just when you think the races couldn’t get any wackier, they do. Partway through the competition, the contestants get to give their wheels (I mean feet!) a rest with a high-speed, “diva-style” ride down the track in super-charged shopping carts propelled by hunky male dancers.

Registration for the all-welcome event is free, and Bourbon St. Pub will provide costumes including high-heeled shoes for entants who (inexplicably) might not have their own. Donations are welcome in return; this year’s race will benefit the Petronia Street Neighborhood Association.

The celebration runs from Friday, April 19, through Sunday, April 28. The schedule is packed with festive events on land and sea, including a lighthearted sea battle and a “Barks & Brews Block Party” benefiting the Florida Keys SPCA.

For drag race information, call the New Orleans House Guest House at 305-293-9800. And if you’re interested in competing, start polishing your glitziest pair of heels!

Connect and Protect: Explore Sustainable Travel Events in the Keys