Sea Turtle Time in the Keys!

By keysvoices|2021-05-13T16:00:20-04:00August 15, 2018|
Dan Evans, right, of the Sea Turtle Conservancy, and Bette Zirkelbach, left, manager of the Turtle Hospital, give “Little Money” a push into the Atlantic Ocean in Marathon, Fla. The 365-pound female green sea turtle was one of two reptiles released off the Florida Keys to become part of the Tour de Turtles. (Photo by Andy Newman, Florida Keys News Bureau)

It’s sea turtle nesting and hatching season in the Florida Keys. So naturally, the Key West Sea Turtle Club and other local environmental organizations are patrolling beaches to help ensure that turtle nests and hatchlings are protected.

In early August, a club member captured rare footage of newly hatched loggerhead sea turtles emerging from their nest on Key West’s Smathers Beach and making a beeline for the Atlantic Ocean.

The footage is rare for two reasons: because turtle hatches aren’t usually witnessed, and because they typically take place in full darkness.

The video also showcases the baby turtles’ amazing instinctive behavior. After hatching at night, sea turtles instinctively proceed toward the brightest light — normally a glow on the ocean horizon that leads them into the water that will become their home.

To safeguard the nest and help the tiny turtles reach the water, the Key West Sea Turtle Club’s members put protective markings around the nest — and created a pathway for the baby reptiles to travel. And that’s exactly what happened: the turtle eggs hatched, and the loggerhead hatchlings scampered down the path right into the Atlantic.

The heartwarming video of their trek, posted on social media, has earned several hundred thousand views as well as comments from turtle lovers around the globe. 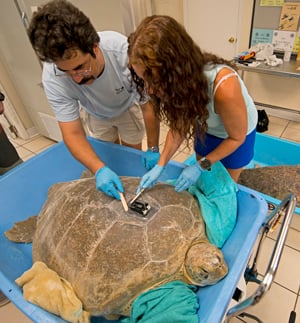 Sea turtle nesting season, by the way, traditionally begins in mid-April and continues through mid-October.

This engaging event isn’t the only sea turtle news from the Florida Keys. In late July, over 1,000 spectators gathered to cheer the release of two sea turtles who were rescued and rehabilitated at the Middle Keys’ Turtle Hospital — and were beginning a historic journey.

“Little Money,” a 365-pound female green sea turtle, and “Coco,” a 215-pound male loggerhead, were fitted with satellite tracking transmitters and released into the ocean to become part of the Tour de Turtles. The annual “tour” is organized by the Sea Turtle Conservancy and follows the long-distance migration of different species of sea turtles.

“Little Money” and “Coco” joined a group of some 17 turtles that began “racing” Aug. 1 and can be tracked online.

Previously, both were found floating offshore of the Keys, clearly in need of treatment. Experts at Marathon’s world-class Turtle Hospital treated them for gastrointestinal issues with intravenous nutrition, broad-spectrum antibiotics and a healthy diet of fish and squid.

“Little Money” and “Coco” are the only rehabilitated turtles competing in the 11th annual Tour de Turtles, signifying the importance of being able to observe turtles’ progress once they’re released back into the wild. Other “competitors” were released off coastlines in Florida, Panama, Costa Rica, Cuba and other Caribbean locales.

You can track the progress of the “Little Money,” “Coco” and their fellow contenders at tourdeturtles.org through Oct. 31. And while the turtle that covers the most distance is declared the official winner, the important knowledge gained through the tour means, in reality, everybody wins.