As the nation honored the legacy of President George H.W. Bush after his Nov. 30 death, longtime residents of the Florida Keys remembered his sportfishing trips to the island chain before, during and after his presidency. 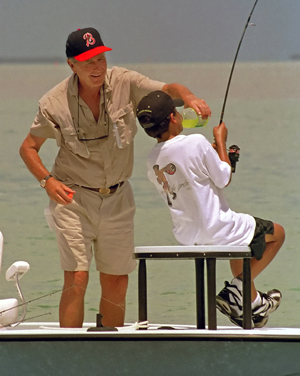 As did I — since, in my role handling publicity for the Keys, I was on hand to photograph him during many of those trips.

The 41st president’s affection for catch-and-release fishing of Keys species such as bonefish, tarpon and permit was so significant that he lent his name to an annual tournament staged in Islamorada.

The George Bush/Cheeca Lodge Bonefish Tournament was held from 1994 through 2003. Each year, it served as a fundraiser for various causes including Florida Everglades conservation and the George H.W. Bush Presidential Library and Museum.

Several tournaments were especially significant — like the one in 1995, when the president and his grandson, Jeb Bush Jr., each caught and released a permit.

Truth is, there was generally nothing more boring than waiting for the president to catch a fish. We’d position ourselves about a mile away with a former White House photographer, the Secret Service and some officers from the Florida Fish and Wildlife Conservation Commission.

More often than not, the president didn’t do very well, always smiling and saying, “… others caught fish, but we didn’t.”

But on Aug. 22, 1995, while he and Jeb Jr. were fishing with his longtime fishing guide and friend, the late George Hommell Jr., they had success. We got the word and raced close to the action.

The president and Jeb had hooked up to two permit. The president reeled in his first, and then he focused on his grandson. 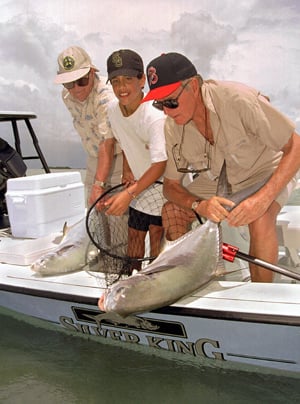 President George H.W. Bush, right, and his grandson Jeb Bush Jr. release permit during the 1995 tournament. At left is the late George Hommell, who is still revered as a legendary Florida Keys fishing guide.

At one point during his battle to boat the fish, Jeb asked for something to drink. President Bush broke out the Gatorade and held it for Jeb to drink. And I was there with my camera. It was, without a doubt, the best shot of about a dozen times I photographed “41” on the water.

That afternoon, after transmitting the picture to newswire services (this was before digital photos), I went to a one-hour lab and had them process some 8x10s.

I presented the president with a print and he asked if he could sign one of the others for me. Today that photo hangs on my home office’s wall, inscribed “Andy — A great shot. Warm Best Wishes. George Bush.”

The “Gatorade” photo, however, was not the day’s only notable photo opportunity. After the president and Jeb had caught their permit, they released the fish back into Florida Keys waters. And that was another moment to be memorialized on camera.

To shoot it, I climbed off the press boat and waded to get close with a wide-angle lens and fill-flash. When I was within a few feet of Bush’s boat, I stumbled and thought for sure that I was going to get very wet.

President Bush saw what was happening and clearly understood that my main concern was for my camera and its contents. His reaction was instantaneous and classic.

I can’t remember if I did or not, but I do recall that I didn’t take a full dunking. And the camera thankfully didn’t get wet either.

As so many others have mentioned both before and after the death of “41,” I will say that he was a really good person. He always remembered my name, always said hello and asked how things were going. And how many other heads of state would have been concerned about saving a photographer’s camera?

R.I.P., Mr. President — from all of us who recall your quality and your love of fishing in the Florida Keys.