By Laura Myers|2021-09-07T19:02:46-04:00June 10, 2020|
Rachel Bowman not only harvests lionfish, but also works with scientists and researchers to gather data and raise awareness about the invasive species. A dedicated champion of the Keys’ native fish, she describes lionfish as looking like “fish wearing a costume.”

Rachel Bowman, the Florida Keys’ only female commercial lionfish harvester, is passionate about protecting native species by controlling the population of invasive lionfish.

A licensed boat captain, she moved to the Keys nearly two decades ago. Now she captures thousands of pounds of lionfish annually, contributing significantly to the “conservation through consumption” movement. 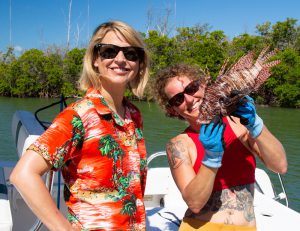 Rachel herself coined that descriptive phrase, feeling it connected the aspects of harvesting an invasive species and using it as a food source. Lionfish have no natural predators (largely because of their venomous spines) and they eat and breed voraciously, threatening local fish. But luckily their light, delicate flavor makes them an increasingly popular choice for diners.

The 41-year-old Rachel enjoys staying busy. She frequently dives off her boat, the Britney Spears, and works with federal and state scientists and researchers to gather data and raise awareness about lionfish.

Though she has only been diving for eight years, Rachel and her four-person teams have taken two first-place wins in the Lionfish World Championship in Pensacola, Florida. During one tournament, her team removed as astonishing 2,241 lionfish in two days.

Rachel was raised in North Carolina. After landing in the Keys, she was hired by Adolphus Busch IV, descendant of the Anheuser-Busch brewery founder, to run his boat while he went diving.

He also taught her how to spear lionfish — a species she describes as looking like “fish wearing a costume.” After she speared her first, she was hooked. 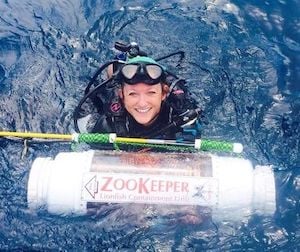 Rachel Bowman: I moved to the Keys in November of 2001. The events of September 11 made me realize, at 21, that maybe life was a little shorter than I had thought. It was time to stretch my wings a little. I thought moving to the Keys for the winter was a good idea … and I’ve been here ever since.

RB: The Keys have an amazing culture of acceptance. You’re not judged on appearance or background. Your accomplishments and character really have a chance to shine here, without being muddied by who your family is or where you’re from.

RB: Adolphus Busch IV. His attitude toward conservation is realistic and commendable. Without him, I wouldn’t know what a lionfish is. Protecting resources so that they can be utilized and enjoyed in a manageable way just makes sense to me. 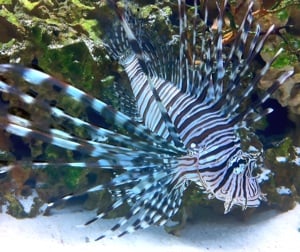 Predatory lionfish are an invasive species with an exotic appearance — and a light, appealing taste.

KV: What are some of the ways that you connect with and/or help protect the local environment and unique lifestyle?

RB: For someone with no science background, I really nerd out about the biology aspect of lionfish. Being able to contribute to research efforts is a huge driving factor in what I do.

RB: I have an amazing network of people surrounding me: my friends, my boyfriend, my stepmothers, my dive “bros.” When the people around you support and encourage you and don’t take “no” or “I can’t” for an answer, you’re motivated to push yourself harder.

RB: Every lionfish I remove from our reef gives other juvenile fish a chance. That’s enough for me. If I can encourage someone to eat lionfish for the first time, that’s a win for both of us.