Get ready for more exhilarating fun and challenges than ever at Key West Pride 2016 — a definite must-do event to kick off the summer. As always, the annual festival, set for Wednesday through Sunday, June 8-12, salutes diversity on the island that’s deservedly world-renowned as a leading LGBT getaway spot.

But that’s definitely not all! You can “Pedal your Pride” during a rainbow bike parade, check out tempting wares during a street fair on Key West’s famed Duval Street, savor a festive brunch served with a drag show on the side, and applaud till your palms hurt at a burlesque experience tailored to LGBT audiences.

Contests bring an extra bit of fun to the five-day festival. Picture yourself sporting a bright-colored tutu as you strive for speed in a 10k relay run-walk … competing for a crown in pageants to select Mr., Miss and Ms. Key West Pride … or even proving just how well you know your spouse in a special Pride edition of television’s classic “The Newlywed Game.”

And for those who crave a good cocktail, Key West Pride also features the final rounds of the 2016 Stoli Original Cocktail Challenge. The contest stars regional winners from LGBT bars in 15 North American cities, all competing to create an original Key West cocktail that reflects the island’s creativity and spirit.

You can meet the bartenders at the Wednesday night Pride kick-off gala, cheer your favorites at Friday night’s contestant runoffs, and celebrate the winner’s triumph after Saturday night’s final round.

That final round, by the way, is set for 7-10 p.m. on an open-air stage in the 700 block of Duval Street. Broadway actor and former “Queer Eye” television personality Jai Rodriguez and Stoli USA’s national LGBT ambassador Patrik Gallineaux are to host — with Emmy Award-winning comedy writer and actor Bruce Vilanch, actress and singer Latoya London, and acclaimed Key West drag queen “Sushi” on hand as celebrity judges. 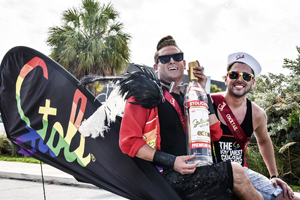 According to the Cocktail Classic website, the event honors “the unique legacy of LGBT bartenders within history and simultaneously recognizes the special place Key West has had for years as one of the LGBT community’s most popular destinations.”

Cocktails are judged on their appearance, balance and taste, as well as the bartender’s personality and showmanship — and bonus points may be awarded for cocktails or presentations that evoke the spirit of Key West.

The new champion mixologist will be honorary grand marshal of the 2016 Pride Parade (an honor indeed). The all-welcome procession will feature a 100-foot section of Key West’s iconic sea-to-sea rainbow flag — and it begins at 5 p.m. Sunday, June 12, and proceeds up Duval Street from the Gulf of Mexico to the Atlantic Ocean.

Following the parade, meet up with your fellow revelers for Stoli’s official after-parade party at the legendary La Te Da — and toast not only the contest winner, but also the entire experience of celebrating Pride on the outstanding island of Key West.