Here in Key West, the Florida Keys tourism council is just wrapping up a month-long photo shoot of imagery to appeal to the LGBT traveler. 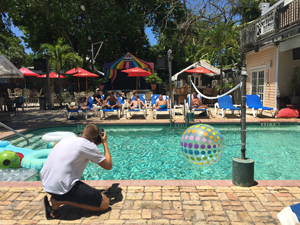 However, this isn’t just any ordinary photo shoot. We wanted to capture images of local gays, lesbians, bisexuals and transgendered individuals — real people, not professional models — living life in our island paradise.

I’m not aware of any other project on the island that has drawn so many local men and women to volunteer their time and effort to show just how safe, relaxing and fun Key West can be — not just as a vacation destination, but as a place to put down roots.

Early in the shoots, I told our model candidates that we wanted to photograph them in their “natural habitat” so that LGBT travelers could easily see that gays, lesbians, bisexuals and transgender individuals are part of the fabric of our community. Indeed, we have been for more than 50 years.

The response to the callout was overwhelming. Looking at my list now, I count over 50 men and women who were eager to step up to the plate to show LGBT travelers just how much fun this island can be. Many of our brothers and sisters here recognized the importance of projecting to the world the kind of same-sex imagery that assures all that Key West is still a prized destination for so many in our unique world.

In the end, about half of those individuals were able to fit our shoots into their personal schedules. 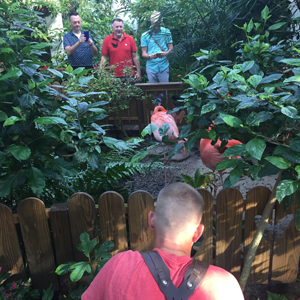 Eric Baker, Dennis Beaver and Trint Keeter check out the flamingos at the Key West Butterfly and Nature Conservatory while Mike Freas (in foreground) gets a shot.

The shoots were a blast! Photographer Mike Freas captured models taking in the early morning sun at the Southernmost Point Marker, wandering among the birds and butterflies at the tropical paradise inside the Key West Butterfly and Nature Conservatory, lunching on delectable Cuban delicacies at El Meson de Pepe, biking past memorials to the sailors on the USS Maine and Cuban revolutionaries in Key West City Cemetery, admiring the artistic works of fellow LGBTers at Stone Soup Gallery and so much more.

We knew that no LGBT photo shoot would be complete without a stop at the Gingerbread Square Gallery on Upper Duval Street. Richard Heyman, who founded the gallery, was one of the first openly gay Americans to be elected to public office. He served as our Key West mayor from 1983 to 1985 and from 1987 to 1989.

Another bit of LGBT history came with the visit to the Tennessee Williams Exhibit at the Key West Business Guild’s Visitor Center on Truman Avenue. Curator Dennis Beaver was eager to show us all the collected memorabilia that’s associated with the Pulitzer Prize-winning playwright’s years in Key West. Tennessee, who wrote such stage classics as “A Streetcar Named Desire,” “Cat on a Hot Tin Roof” and “The Glass Menagerie,” lived on the island with his partner, Frank Merlo. 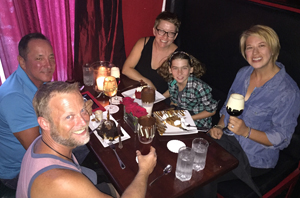 I’m told that photographer Mike is working with Venus Charters, BluQ and Nomadic SUP on shoots of gay and lesbian couples and singles swimming, snorkeling, kayaking and enjoying other water adventures in the upcoming days.

Every one of them — community models and businesses — contributes to making Key West the incomparable place it is today.