Most people know the Florida Keys are famous for their fabulous underwater beauty, which includes the continental United States’ only living coral barrier reef. But far fewer people are aware that the Keys are among the top destinations in the entire world for year-round bird watching.

That’s because avian rarities abound — and birders, outdoor enthusiasts and nature photographers can enjoy native wildlife and tours in one of Florida’s most treasured ecosystems. 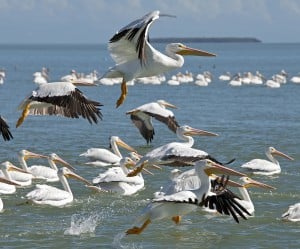 What are some of the Keys spots that appeal most to adventurous birders? Read on and find out!

ONE: In the Lower Keys, the National Key Deer Refuge’s 9,000-plus acres of mangrove forests, freshwater and salt marsh wetlands, pine rockland forests and tropical hardwood hammocks are an annual stopping point for thousands of migratory birds — and a winter home to many North American bird species. The refuge lies off U.S. Highway 1 at mile marker (MM) 30.5 bayside on Big Pine Key. 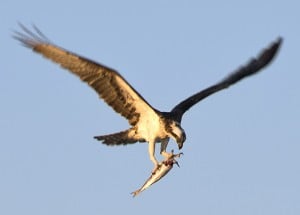 An osprey clutches a fish as it hovers above its nest atop a pole adjacent to the Florida Keys Overseas Highway.

THREE: At Long Key State Park (located at MM 67.5 in the Middle Keys), mangrove swamp, mudflat, rockland hammock, beach and coastal berm habitats can be explored. And at low tide, the lovely Roseate Spoonbill just might be spotted dipping its round-tipped bill into the shallows searching for a meal — joined by reddish and other egrets.

FOUR: The tiny islands of Dry Tortugas National Park are the first dry land sighted by trans-Gulf migratory species — so migratory fallouts during late April and early May often become once-in-a-lifetime experiences. In fact, birders there have recorded 25-warbler mornings (!) and regularly sighted an Antillean short-eared owl. Common sightings include frigate birds, peregrine falcons and the ruddy turnstone. Plus, the Tortugas’ Bush Key is home to America’s only notable breeding colony of sooty terns. 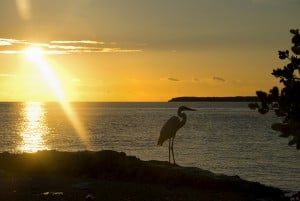 An indigenous Florida Keys great white heron stands on the shoreline in Islamorada.

SIX: From a perch at the Middle Keys’ Curry Hammock State Park, MM 56.2 oceanside, the Florida Keys Hawkwatch team monitors the southernmost migration flights of record numbers of peregrine falcons and other raptors in the continental United States. Hawk watchers count the thousands of buteos, accipiters, raptors and eagles that fly through the Keys as well as peregrine falcons — whose annual migratory numbers are thought to surpass any other area in the U.S.

If you’re eager to explore some of the Florida Keys’ wild places listed here, where can you find information about guided and unguided walks, boat and kayak adventures? Just click here.