While some runners push themselves to race long and grueling distances, participants in one recent Florida Keys challenge did the exact opposite. About 1,400 “athletes” who didn’t want to break a sweat romped, strolled and ambled across the Keys’ shortest bridge (spanning mere feet!) during April’s Cow Key Channel Bridge Run. 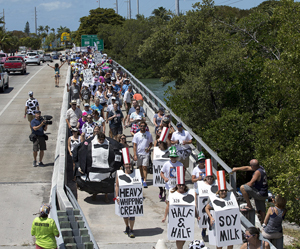 It’s dubbed the planet’s only “zero k race,” and competitors charted a course across the bridge between the entrance to Key West and neighboring Stock Island — a distance of about 300 feet.

Before the race, entrants gathered in a shady waterfront “corral” to register and show off their costumes to fellow competitors.

And costumes were both plentiful and wacky — many of them cow- or bull-themed and clearly inspired by the name of the bridge over the Keys’ Cow Key Channel.

Some “athletes” combined cow masks or headgear with bright-colored tutus (because apparently, if wearing a cow headdress is funny, then wearing it with a tutu is even funnier).

Others dressed in hippie attire and horned cow masks, and carried signs urging spectators to “Give Cheese a Chance” and proclaiming “To Err is Human; to Forgive Bovine.”

And it was hard to overlook the troupe of dancing milk cartons, whose cardboard exteriors read “Soy Milk,” “Half & Half,” “Heavy Whipping Cream” and more. 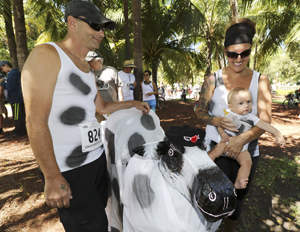 Jerry and Kate Motz (shown here with son Logan) dressed their twin babies in cow t-shirts and turned their double stroller into a perambulating cow for the offbeat “race.”

For Key West couple Jerry and Kate Motz, the quirky race meant fun with their 6-month-old twins Liam and Logan. They decked out the twins’ double stroller to look like a short black-and-white cow and dressed the babies in matching cow t-shirts. Despite dozens of people snapping their pictures, Liam and Logan seemed to take it all in stride.

Even dogs sported black-and-white cow costumes — like tail-wagging poodle Izzy BamBam and maltese/poodle mix Dusty Doolittle. And then there was Bella the bulldog, who waddled across the bridge in seemingly good spirits despite the indignity of having her stocky body stuffed into a multicolored tutu.

Plus, for some reason that will probably always remain obscure, the event also drew competitors costumed as Elvis, a gigantic red-and-gold rooster, and a huge furry creature that was either a gorilla or a clone of the iconic “Star Wars” beastie Chewbacca.

The race took place on the Overseas Heritage Trail beside the road itself, so car traffic wasn’t disrupted (but no doubt a few drivers were startled by the ill-assorted “herd” they passed). 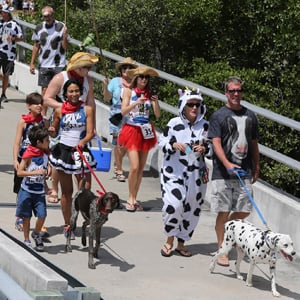 The quirky event even had a special division for people with pets — giving canines a bovine moment.

Entrants were encouraged to clock their own time, and a few actually took the challenge seriously enough to achieve a respectable speed. Key West runner Blake Steinke pelted across the bridge in just 22 seconds, gleefully shattering the previous course record of 23.1 seconds.

As well as Blake’s first-place prize for speed, participants competed for the coveted “Golden Calf” awards in multiple categories.

Proving their sense of humor was as offbeat as the event itself, organizers gave the honors bovine and bullish names.

They included the Udderly Awesome Award for the best costumed individual and the Mad Cow Award for the entrant deemed “a random crazy person.” (Hmmm, tough to choose just one …)

The Cow Key Channel Bridge Run doubles as a fundraiser, with a portion of each year’s proceeds donated to the Florida Keys Sheriff’s Animal Farm on Stock Island — a fabulous menagerie of mostly rescued critters that includes an emu, African spurred tortoises, a ring-tailed lemur, a two-toed sloth, and (fittingly) a black bull named Angus.