Mehgan Heaney-Grier: A Dive into History

In the summer of 1989 at age 11, Mehgan Heaney-Grier moved with her mom, older sister and new stepfather from chilly Minneapolis to the subtropical Florida Keys.

“I remember thinking that I just hit the jackpot,” she said. “Moving from Minnesota to the Florida Keys and be surrounded by the ocean. What kid wouldn’t?”

Her love for nature led her to love the underwater world of the Keys. 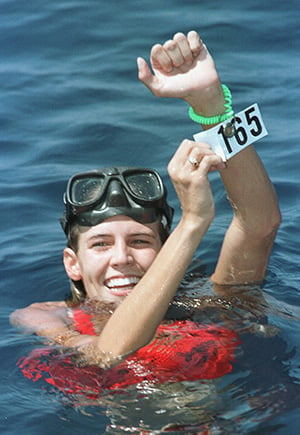 Mehgan shows off the 165-foot tag she grabbed after diving, on a single breath of air, to that depth off the Florida Keys in August 1997. (Photo by Andy Newman, Florida Keys News Bureau)

“Every day when I wasn’t in school, I was in or on the water,” Mehgan recalled.

And that affection led her to set a U.S. record for constant-weight freediving on Oct. 21, 1996. It meant diving into the abyss to 155 feet on a single breath of air, not only without breathing apparatus, but doing it without the aid of weights that would help her conserve energy and oxygen.

On Thursday, Mehgan, now 39, reflected on her 20-year-old achievement by phone from her home near Boulder, Colorado.

“I worked and trained incredibly hard to do that record dive, and to do a ‘first’ for the U.S.,” she said. “It gave me a deep feeling of accomplishment and pride.

“I had pushed the limits of the time — and for myself as well,” she said. “That day I dove deeper than I had ever been before.”

The record meant newfound fame for the then 19-year-old fashion model. She made guest appearances on television shows like “The Late Show with David Letterman” and “Baywatch,” and was featured in articles in magazines such as Life, People and Outside.

“It was an exciting time and I was totally living in the moment,” she said. “I didn’t know what the future held, but mostly I wanted to be underwater as much as possible … and was trying to do what I could to keep on that path.”

But while the love of freediving continued for Mehgan, her quest for setting more records waned and she turned to other endeavors. She captained and helped to establish the first United States freediving team to compete in the 1998 World Cup Freediving Championships in Sardinia, Italy.

Mehgan also helped launch a series for Animal Planet network around freediving and interacting with marine life and reptiles. And she did more work for television shows, documentaries and even stunt diving for feature films such as “Pirates of the Caribbean.” She was among the first to be inducted into the Women Divers Hall of Fame. 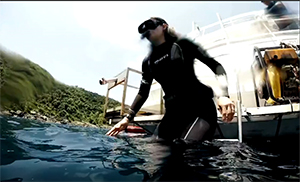 Her latest broadcast endeavor is “Treasure Quest: Snake Island,” a reality television series that airs on Discovery Channel. Mehgan is an anthropologist/diver in the series that follows a crew of treasure hunters searching for Inca gold on an island off the southeastern coast of Brazil. “Treasure Quest” is to begin its second season Nov. 4.

In 2010 Mehgan married and she became a mom in 2013 — two years after graduating from the University of Colorado Boulder with a Bachelor of Arts degree in Ecology and Evolutionary Biology as well as a B.A. in Anthropology.

“My mom and stepdad still live on the same street I grew up on in the Keys and I get back every chance I can,” she said. “It’s important that I show my son where I grew up and make sure he understands what a special place the Keys are.

“My aquatic endeavors have taken me all over the world and the Keys are still my favorite place to dive,” said Mehgan. “There is no place that I feel more at home than when I’m underwater in the Keys.”

To mark the anniversary of her world-record dive, and in preparation for the season two release of “Treasure Quest: Snake Island,” Mehgan will be streaming live on her Facebook page Friday, Oct. 21, at 10 p.m. ET. During the Q&A session, she is to take questions from fans about freediving, her record dives and the upcoming TV series.