By Carol Shaughnessy|2022-05-18T12:07:16-04:00May 18, 2022|
Creatures from commonplace to exotic are cared for at the Florida Keys’ Sheriff’s Office Animal Farm by “Farmer” Jeanne Selander and the low-risk detention center inmates who assist her.

The Florida Keys are well known as the home to endangered sea turtles, stately blue herons and other bird life, fish from scores of species and a flourishing herd of tiny, shy Key deer. 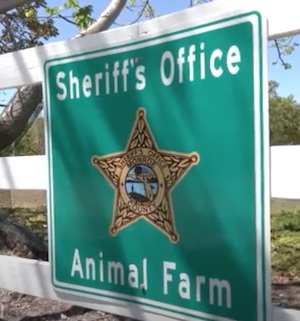 But a lesser-known population of animals has also found a home in the island chain — at a unique refuge on the grounds of the Monroe County Sheriff’s Office detention center near Key West.

The Children’s Animal Farm, managed by the sheriff’s office, houses about 150 domestic and exotic animals from 45 species.

And it benefits both the animal “residents” and the jail inmates who help take care of them.

“This is an animal sanctuary, and we take in animals that have been abandoned, abused, confiscated or donated,” said animal farm supervisor Jeanne Selander. “They come to us because they need a home, and we give them a forever home.”

“Farmer Jeanne” oversees a crew of inmate “trusties” who help look after the animals. All are screened and classified as being safe to work outside the detention center and interact with the public.

“The inmates working on the farm benefits the farm, because we have a workforce that can actually help care for the animals,” said Jeanne. “And it’s beneficial to the inmates because they get to be outside, get to work with the animals, get to feel like they’re making a difference — and a lot of them say they appreciate being able to give back to the community.” 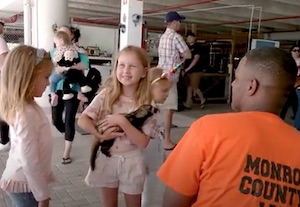 Young visitors meet one of the animal farm’s furry residents, under the guidance of “trusty” Michael Hernandez.

Trusties feed, water and care for animals that range from goats, sheep, pigs and miniature horses to Kramer the emu, a pair of armadillos, an alligator, kinkajous, lemurs named Kelsey and King Julien, and a 70-year-old African spurred tortoise dubbed Albert. They also build habitats, paint and repair fences.

“It’s calming, very calming,” said trusty Michael Hernandez. “Keeps you out of trouble, keeps your mind focused. You know you’re in the outside world.”

The farm began in 1994 in an open area underneath the jail facility (which was built on stilts).

Its first inhabitants were some homeless ducks, who were joined shortly by a blind horse found abandoned in the Miami area. Inmates built a pen for the horse, subsequently named Angel, and the population expanded from there.

“As far as I know, this is the only facility of its kind in the country and maybe even the world,” said Farmer Jeanne. “I have not found anywhere else that has a petting zoo at a jail.” 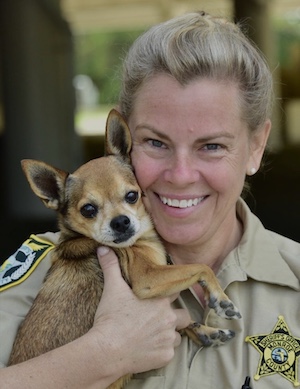 As well as overseeing the animal farm, Jeanne Selander provides a “forever home” for rescued dogs.

The facility is open to the public on the second and fourth Sunday of each month. Scores of families and kids stop by to observe and interact with the animals, and trusties introduce the visiting kids to selected sanctuary inhabitants.

Admission to the one-of-a-kind farm is free, but donations are accepted and much appreciated.

The only indications of the jail setting are barbed wire atop the tall surrounding fences and the orange detention jumpsuits worn by inmate workers.

For animal lovers who can’t stop by personally, it’s possible to “meet” the farm’s residents via its web page and Facebook page.

Michael Hernandez, who describes himself as an “animal person,” recently said he wanted to continue spending time at the farm even after the end of his jail term.

“I’m hoping to visit the farm to do some more work, paint some more, play with the animals some more — you know, so they won’t forget me,” he said.