I couldn’t believe the sidewalk was vibrating under my feet as I walked down Catherine Street to La Te Da, the famous guesthouse on Upper Duval that hosts Key West’s traditional Tea Dance every Sunday evening.

The sidewalk was shaking, and I was still a block away from the place! 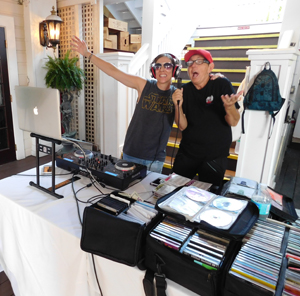 Tea Dance was in full swing and deejays Rude Girl and Molly Blue were blasting “Lady Marmalade” (the original Labelle version from 1975) for a massive crowd of locals and visitors balancing cocktails while they danced, sang and swayed seductively.

What LGBT community would be complete without a Tea Dance, your chance to meet up with friends and enjoy one last celebration before Monday morning rolls around?

Of course, our Tea Dance has been around for decades, probably going back to the early 1970s when droves of gays and lesbians were just starting to discover Key West as a safe, open-minded and welcoming refuge with year-round sunshine, plenty of cheer and overall good vibes.

Our Tea Dance has an interesting history, too, moving between the Copa nightclub (lost to a 1995 fire) and the late lamented Atlantic Shores Resort before landing at La Te Da. Clearly, Key West loves its Tea Dance!

Rude Girl, a local morning show favorite on WEOW FM 92.7, told me she has deejayed Tea Dance off and on over the past 20 years.

“Anything goes here, much like the old Copa days,” she told me. “This is the best melting pot — a cross-section of what the Florida Keys represent. It’s like a town hall meeting with dancing.” 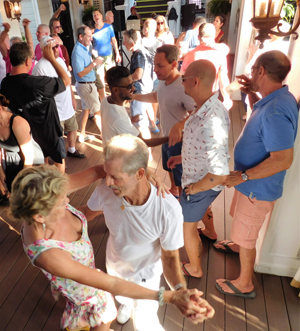 A tanned hunk wearing only rowing shorts, tennis shoes and a dazzling smile whizzed by with a tray full of lime green Jell-o shots and a can of whipped cream just as “Fascinated” (Company B’s big hit from 1986) came on the loudspeakers.

Key West Police Chief Donie Lee and Tony Falcone, a prominent local businessman who owned the legendary Fast Buck Freddie’s department store, were among the locals jumping onto the giant poolside deck to get down and funky with the rest of the crowd.

I met La Te Da owner Christopher Rounds back in the kitchen to talk about the Sunday evening soirees, while Cher’s epic anthem “Do You Believe in Love?” was raising the roof.

La Te Da has a long and glorious history, dating back to Cuba’s fight for independence from Spain in the late 1800s. The name is short for “La Terraza de Marti” or “The Balcony of Marti,” named after Cuban revolutionary Jose Marti who delivered speeches from the second-floor terrace overlooking Duval Street. 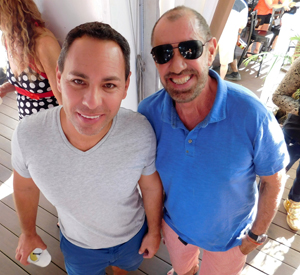 Today, La Te Da is a world-renowned mainstream guesthouse for visitors 21 years and older. Its attractions include a poolside bar and restaurant, a piano bar and a cabaret featuring sensational female impersonators Christopher Peterson and Randy Roberts.

“We have such a mix here,” Christopher Rounds reported. “Last week, we had college kids dancing with 70-year-olds.”

La Te Da has always been a popular meeting place for gays and lesbians (according to Christopher, they even hosted a lesbian wedding on the property last year). That’s one reason it was considered a “natural” when it came time to decide where Tea Dance would land after moving between other locations over the years.

If you’re down in Key West on a Sunday evening, be sure to stop at La Te Da between 4 and 6:30 p.m. for cocktails, great music and a chance to “shake your groove thing” with locals and visitors in our own little outdoor Studio 54.