When Randy Towe was 10 years old, he asked his mother to buy him a $200 custom fishing rod. His mother didn’t agree with the investment, so he convinced her to spend considerably less and purchase the necessary parts.

The young fishing fanatic then built his own rod.

Now more than 40 years later, Randy not only continues to build rods for himself, he also crafts them for others — all from his store in the Florida Keys. 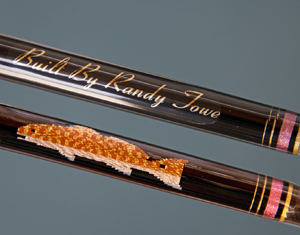 Every Randy Towe rod is crafted with precision and care by the captain himself. (Photo by Andy Newman, Florida Keys News Bureau

Infatuated with sport fishing, Randy moved to Islamorada at age 19. He mated on an offshore charter boat and earned enough money to pay his $250-per-month rent and cover his living expenses.

In 1983, he got his U.S. Coast Guard captain’s license and began taking customers out in the backcountry. He was making $350 per trip and “living the dream.”

But that didn’t seem to keep him busy enough, so he rented a small business space and started a rod-building business just because it offered him a “therapeutic opportunity to take a break from fishing.” His brand, Captain Randy Towe’s Signature Series Handmade Rods, has become well known to dedicated anglers.

“I make everything from fly to heavy offshore trolling rods — I can make a rod for every species of fish that swims off the Keys,” Randy said. “I build exactly what the customer wants, how they want it to feel and exactly what they want to do with it.”

His rods are all about fit, finish and top-quality parts. So when a custom rod is ordered, he discusses the project personally with the customer. Among discussion topics, Randy explained, is “the look.”

Some people prefer specific colors to match their boat, company logo or their favorite sports team. Then there’s the choice of the blank — either fiberglass or high-tech graphite — grip, a reel seat and guides … whether in titanium or even gold.

And he developed a thread-wrapping technique that creates a small version of a bonefish, redfish, tarpon or dolphin just above the rod’s grip.

“Some like a lot of design and flash,” Randy advised. “Some people are more interested in the function, feel and action of the rod rather than the bling.”

Anyone who purchases a Towe-built rod can rest assured that the entire package has been assembled by just one person: Captain Randy Towe.

He not only builds rods alone, he also prefers to fish customers in the same manner — whether it’s in the backcounty for tarpon, bonefish and snook on his 18-foot Action Craft skiff or offshore for yellowtail snapper, sailfish, blackfin tuna or dolphin fish on his 34-foot Pursuit.

“There is nothing I build that I don’t test,” Randy stated. “And I’m the envy of everyone in the rod-manufacturing business because I have the testing grounds of the Florida Keys in my own backyard.”

Many of his customers come to him because they are very serious anglers — some even focused on breaking world records — and the rods become highly prized possessions.

“I had to testify in court when a couple got divorced,” he recalled. “They were arguing over a set of fly rods and reels. She got them, and she had me take his name off of them.”