Getting to Key West is Half the Fun

It’s almost inevitable — sometime this fall or winter, your thoughts will turn yearningly toward Key West. Maybe you’ll be drawn by the glitzy outrageousness of Fantasy Fest, or the sudden desire to spend New Year’s Eve snuggling with someone special while watching the “red shoe drop” on Duval Street that marks 2017’s arrival. 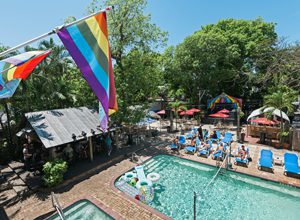 Or maybe it will be a natural reaction to the chilly weather that’s drifting sneakily into much of the U.S. But whatever sparks it, the chances are good that, sometime soon, you’ll feel an almost irresistible need to head for Key West.

And that makes this the perfect time to review the ways to get to the welcoming subtropical spot at the tip of Florida.

Actually, traveling to the picturesque island of Key West is a bucket-list adventure in itself. Driving the historic, 127-mile Florida Keys Overseas Highway is considered by many travelers to be the trip of a lifetime. “The highway that went to sea” is Florida’s only federally designated All-American Road — and one of just 42 All-American roads in the entire United States. (That designation, BTW, is the highest possible recognition a road can receive under the National Scenic Byways Program.)

But flying over the Keys island chain into Key West International Airport is an unforgettable journey too. Whether your trip is by road or air, the journey to Key West offers breathtaking scenery, framed by wide-open vistas of aquamarine waters and bright blue sky.

You can fly into Key West, via connecting or direct flights from many domestic or international hubs, on American Airlines/Envoy, Delta Connection, U.S. Air and Silver Airways. Direct regional flights originate from locations including Miami, Fort Lauderdale, Orlando and other Florida cities as well as Atlanta, Washington, D.C. and North Carolina’s Charlotte. 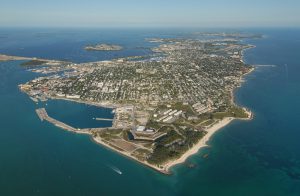 While many visitors choose to drive to Key West, the wide range of airline options makes it easy to arrive by air. (Photo by Andy Newman, Florida Keys News Bureau)

On top of all that, United Airlines is scheduled to launch seasonal flights on 70-seat regional jets into Key West from Newark late in 2016, and from Chicago in early 2017.

Let’s face it — all that airline availability means you have NO EXCUSE to deny yourself a Keys escape.

Despite the air options, however, most Florida Keys visitors choose to drive from Miami or Fort Lauderdale to get the full experience of the famed Overseas Highway.

Beside the road, you’ll spot green mile markers or mileposts designated with white numbers. Those numbers descend in order from mile marker 127 in Florida City on the mainland to mile zero in Key West.

The highway wasn’t the first route through the Florida Keys. It follows a trail blazed in 1912, when railroad baron Henry Flagler completed the extension of his Florida East Coast Railroad from Miami to Key West — and the railroad operated until it was damaged by a 1935 hurricane.

By 1938, it had morphed into the Overseas Highway, which includes 113 miles of actual roadway and a mind-boggling 42 bridges. The highway was built of coral bedrock, some original railway spans and specially designed columns. 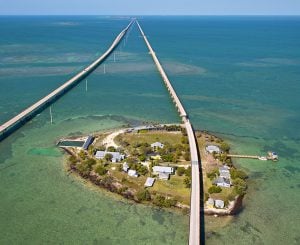 The renowned Seven Mile Bridge at Marathon and 36 other bridges were replaced with much-needed wider spans in 1982.

The Overseas Highway is the foundation of the Florida Keys Overseas Heritage Trail, a biking and pedestrian greenway that will extend 106 miles from Key Largo to Key West when it’s totally completed. Ninety miles are currently in use for biking, hiking and rollerblading — with easy access to fishing, paddling, snorkeling, swimming and diving.

You can drive the full length of the Overseas Highway in about four hours, traveling from Key Largo through Islamorada, Marathon and the Lower Keys — but don’t rush.

Instead, allow yourself time to stop along the way and explore the intriguing island chain. Off-the-beaten-path beaches and parks, shops carrying one-of-a-kind Keys-crafted offerings and funky waterfront dining venues serving succulent fresh seafood are not to be missed.

Interested in more info about getting to Key West, and what to expect once you get there? Then simply click here and here (because you know you want to …).