Get Your Glitter on for Key West’s Glamorous Headdress Ball

If you think your Halloween finery is head-and-shoulders above the rest this year, then Key West is the place to prove it. That’s because revelers hoping to make “headlines” will take center stage in the island city Thursday, Oct. 27, at the 34th annual Headdress Ball. 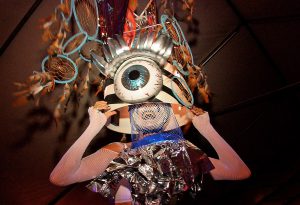 The glamorous gala will be held under a gigantic tent at Key West’s Truman Waterfront (located at the end of Southard Street beyond the lovely Truman Annex).

Designing men and women wearing elaborate masks, cowls, bonnets and other headgear will vie for cash prizes at the head-turning event. The first-place winner takes home a cool $3,000, while second prize is $1,000 and the third-place finisher gets $500.

That alone should tell you that these are not run-of-the-mill masks or headdresses. Instead, the glitzy-to-the-max creations are typically decorated with feathers, sequins, and unexpected or bizarre accessories — so if you’re thinking about entering, fire up your imagination and your glue gun.

Some headdresses in past years have even featured moving parts, like Virginia Wark’s “Animated Dream Catcher” that won the 2014 competition. Others, like Janet Sherfey’s entry that same year, loom far larger than their wearers.

Notable past competitors have also included a woman whose headdress featured a lavishly decorated revolving teapot that dispensed “tea” into whirling teacups (!). And few can forget the devilish creature with a nearly four-foot feathered headdress suggesting flames, or the offbeat serpent whose garb included garish oversized eyeballs. 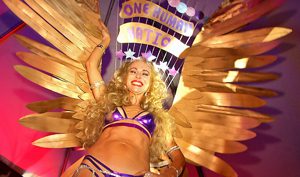 If you’re in the audience at the “heady” 2016 competition, expect to see Florida Keys celebrity judges, dazzling entertainment and a liberal dose of the outrageous. Between headdress presentations, organizers plan a talent revue featuring the renowned female impersonator Christopher Peterson and other top local performers.

Doors open at 6:30 p.m. and the show, emceed by beloved Keys actor Tom Luna, begins at 8 p.m. But spectators are invited to come early to mingle, marvel at the extravagant entries, and take “selfies” with the competitors.

Scheduled in conjunction with the annual Fantasy Fest masking and costuming celebration, the Headdress Ball is billed as the festival’s premier LGBT event. It’s presented by the Key West Business Guild and raises funds for the organization’s programs.

To register to compete at the glittering gathering, click here. And for spectator tickets (whether general admission or a reserved table), click here. 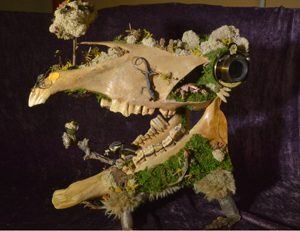 This tiny float made a big impression at the Smallest Parade in the Universe.

For those who prefer celebrations on a smaller scale, there’s another pre-Halloween event scheduled in Key West that’s sure to please. Clever and creative artisans are set to display miniature floats in the island’s second annual Smallest Parade in the Universe.

All entries must be “PG-13” rated and must not exceed a length, width or height of 18 inches (yes, really!). The tiny floats will be displayed from 5-9 p.m. Thursday, Oct. 27, at the Waterfront Brewery at 201 William St. They’ll “parade” down a replica of Key West’s famed Duval Street while projections are flashed on the “street” to make them look like full-sized floats.

Event proceeds benefit the Monroe Association for ReMARCable Citizens, a nonprofit that provides life services for adult developmentally and intellectually disabled residents of the Keys. And in keeping with the “all-small” concept, spectator tickets for the petite parade are only $20 per person.