Their attentive service and customized trips attract serious anglers, corporate groups and families to the heart of the Florida Keys for big game fishing, lobstering, snorkeling and exploring. 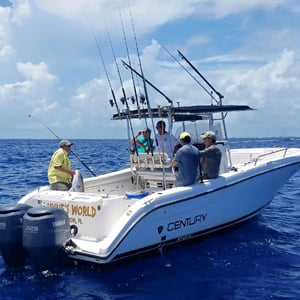 Wayne’s World is one of four boats in the SeaSquared fleet.

The lure of sport fishing reeled in owner Captain Chris Johnson as a young boy accompanying his mother on fishing trips off the New Jersey shore. When he was just 3 years old, she taught him to fish in a front-yard puddle.

“Fishing was my ultimate professional goal from an early age,” Captain Chris said. “I enjoy being outside and on the water at every possible moment.”

Chris and Christy’s charter business has evolved so successfully that their fleet has grown to four boats — plus additional captains to serve customers to the Johnsons’ high standards.

“Family fishing is all about having fun,” Chris said. “Our captains keep it calm, both on the water and on the boat.

“We offer an interactive experience where our anglers learn about the fish they’re catching and our coral reef system, with Florida Keys history thrown in too,” he added.

SeaSquared’s variety of fishing excursions helps to fill client memory books, dinner plates or trophy walls with reproduction mounts (depending on the time of year). And it’s about more than just fishing, since family fun days also can include snorkeling and exploring a sandbar.

Clients can fish for high-leaping sailfish, dolphin (mahi-mahi), tuna and wahoo in offshore waters. Tarpon can be caught near historic Middle Keys bridges. 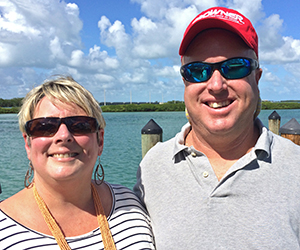 “Shark fishing has been a big demand and is a huge part of our growth,” Chris said. “Once caught, we bring the sharks to the side of the boat for their photo op and then let ‘em loose.”

Although it often surprises clients, sharks are endangered and misunderstood around the world — so education is a key facet of the SeaSquared experience.

In fact, Chris reported that a University of Miami Rosenstiel School of Marine & Atmospheric Science study on catch-and-release shark fishing, conducted with SeaSquared, showed the sport has little stress impact on the species.

Raised in Wall Township, New Jersey, the captain landed his first job at age 12 scrubbing buckets at a marina. He later worked at a bait and tackle shop, and then at a dive shop until he was 21. 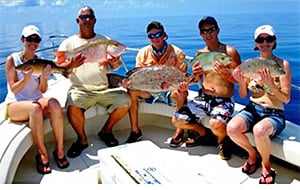 Chris and Christy married in 2005 and launched SeaSquared Charters. The name comes from a play on words — combining the names of Chris and Christy for “C-squared.” Christy Johnson oversees business operations and manages SeaSquared’s website and online presence.

“It was full steam ahead with no looking back,” recalled Chris Johnson, who spent a year learning Marathon’s waters.

He has created awareness of his operation and Keys fishing with appearances on several fishing television shows. He also pens periodic fishing reports for local and regional media, and even conducts fishing seminars and children’s clinics.

The Johnsons, like adventure writer Mark Twain, believe that fishing — like the game of life — helps to teach important lessons.

In the words of Twain, cited on SeaSquared’s website: “When you fish for love, bait with your heart, not your brain.”