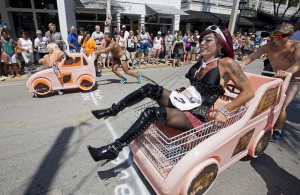 Designed to showcase drag stars instead of dragsters, the wacky event gave contestants in wigs, makeup and outrageously high heels a chance to strut their stuff as they raced down Duval Street, Key West’s aptly nicknamed “main drag.”

The most notable entrants included a siren in a purple tutu and rainbow-hued fishnet stockings, a “diva” wearing a strapless turquoise jumpsuit, and a stylishly tousled blonde in basic black and high red boots … with an incongruous full beard.

Contestants were handicapped based on the height of their heels above the regulation minimum three inches.

More than 1,700 race enthusiasts lined the street to see the “girls” sprint and stagger through the course while trying to avoid stumbling or breaking a heel. Judges evaluated entrants based on their speed. 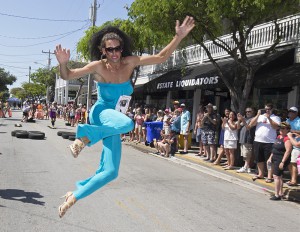 Presented by the Bourbon St. Pub, the drag challenge is part of the annual Conch Republic Independence Celebration that commemorates the Florida Keys’ symbolic 1982 secession from the United States.

The celebration runs through Sunday, May 1, with events including a sea battle featuring historic tall ships, a parade down Duval from the Atlantic Ocean to the Gulf of Mexico, and an open-air bed race billed as “the most fun you can have in bed with your clothes on.”