For a high school–age employee at Florida Keys Aquarium Encounters, having her winning science fair project on bonnethead sharks displayed at the aquarium — where thousands of visitors could see it — was a really big deal.

It was also a big deal to the Marathon attraction’s co-founder, Ben Daughtry. Ben’s passion for creating educational experiences in marine conservation led him to open the unique marine life attraction — where visitors can enjoy immersive experiences with reef fish, invertebrates, stingrays and even sharks without entering the ocean. They can also feed reef fish, which is not allowed in the open waters of the Florida Keys National Marine Sanctuary because it disrupts the fishes’ natural behavior. 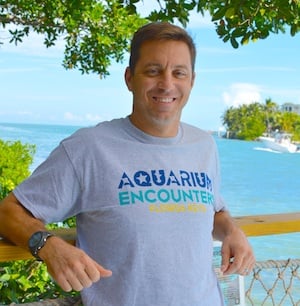 “If you can add in an educational aspect and make people understand what they’re doing, and at least get some sort of experience and exposure as to what’s going on out there [in the ocean] and what’s worth conserving, I think you can generate a deep-seated feeling that they’ll take home with them,” said Ben, who spent nearly 20 years guiding Florida Keys Aquarium Encounters from concept to completion.

Born in Key West and the grandson of a Keys commercial fisherman, Ben graduated from Marathon High School with just 66 classmates.

“It was like a private school,” he said. “Most of my closest friends now I have known all my life.”

The idea for Florida Keys Aquarium Encounters was born during a 1996 visit to a similar aquarium experience on the island of Curaçao.

“At the end of it, I just sat for an hour or two and listened to people and what they said about it. Novice divers as well as dive instructors all said, ‘Man, what a cool experience,’” Ben recalled. “What a perfect opportunity for the Florida Keys, which has divers come from all over the world, to do that kind of thing.”

An eye injury during his high-school years derailed Ben’s hopes of an ROTC scholarship and a career in on-the-water law enforcement. A skilled divemaster before he turned 20, he considered training locally at Hall’s Diving Center and International Career Institute to become a dive instructor.

But instead, the owner of Marathon’s Dynasty Marine Associates — a rare marine acquisitions business where a teenaged Ben had worked packaging marine life and tropical fish for transport — took a chance and hired him for a six-month trial.

“I never looked back after that,” Ben said.

Now a shareholder in the business, he splits his time between Dynasty Marine and Florida Keys Aquarium Encounters.

Ben considers himself a conservationist and is a member of the Florida Keys National Marine Sanctuary Advisory Council and provides guidance on issues affecting marine fisheries.

“We are marine life commercial fishermen, but our goal is to keep everything alive,” he explained, “meeting the need to supply animals to public aquariums for educational opportunities and to [scientific] institutions for research.”

Dynasty Marine has delivered animals to every continent except Antarctica, so millions of children and adults at aquariums around the world can see and become educated about animals from Florida Keys waters — and learn to recognize the value of saving the world’s coral reefs.

Although he admits that if he were still single he would work seven days a week, Ben now spends off-days on the water fishing or snorkeling with his wife Nicole and two boys, 6-year-old Kye and 3-year-old Kase.

“When I was diving 200 days a year, the last thing I wanted to do was come home and go back out on a boat — but now I really enjoy it with the kids and my wife,” he said. “It’s been a nice shift for me, going out for pure fun.”