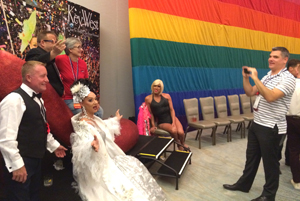 Seemingly everyone knew about the drop and its star, and “Is she here?” was a common question from attendees. Most grinned with delight when they found out they could take “selfies” with the beautifully gowned Sushi and her best friend Kylie while reclining in the glittering red heel.

The NLGJA media summit brought together leading print, broadcast and online journalists, bloggers and other media professionals to discuss issues, challenges and perspectives relating to accurate and inclusive coverage of the LGBT community. 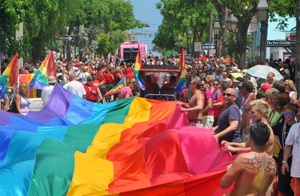 Also on hand, adding to the Keys vibe that flavored the opening gala, was a 100-foot-long section of the 1.5-mile rainbow flag that was unfurled on Key West’s Duval Street in 2003 — stretching the length of the street from the Gulf of Mexico to the Atlantic Ocean in a stirring display of sea-to-sea pride.

Since then the 100-foot section has traveled the globe as a bright-colored “ambassador” for diversity — and at the NLGJA reception, it was treated with the reverence it deserves.

Guy Ross, who spearheads the Keys tourism council’s work in showcasing the island chain to LGBT travelers, put the finishing touches on the evening with insightful remarks about the enduring appeal of Key West in particular. 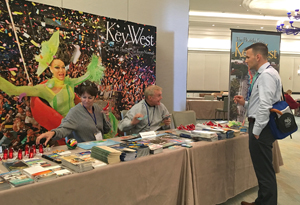 “Back when gay life existed in a parallel universe separate from jobs, birth families and an intolerant mainstream, the LGBT community opted to vacation in out-of-the-way destinations,” he said. “And Key West has always been one of the few truly accepting come-as-you-are places where LGBT visitors could express their creativity, their freedom and their love.”

As well as reminding listeners that the island was the first U.S. city to elect an openly gay mayor, Guy cited current gay and lesbian community leaders and the huge number of LGBT vacationers that visit each year. He even assured attendees that, despite uninformed rumors to the contrary, Key West is “still gay.”

“Key West has ignored stereotypes and refused to see boundaries for centuries — and the LGBT community is an integral, fully embraced part of our little island,” he said. “Today, if you want to see what the future looks like for the LGBT community, come to Key West.”