When I attended this year’s Miss Gay Southernmost USofA and Classic pageant at Key West’s San Carlos Institute, I had no idea what to expect. 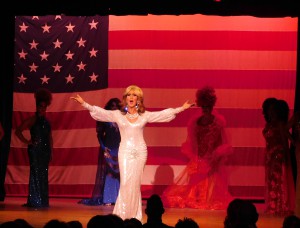 Miss Gay USofA Classic Roxie Hart kicked off the evening with a lip-synch of Whitney Houston’s epic version of the national anthem.

Les Steele, a former competitor who now owns and produces the southernmost franchise of the Miss Gay USofA pageants, told me recently that high drag has always been his passion. No doubt, the tremendous passion Les has for this event drove the four-hour entertainment extravaganza that transported me from Key West to Las Vegas, Broadway, the Far East and back again. It completely blew me away!

Randy Roberts, a local drag sensation who performs regularly in the upstairs cabaret at La Te Da, emceed the pageant. Randy kept us laughing throughout the night — a vision in a floor-length fringe dress in glittering hot pink that had some of the more dazzled audience members repeatedly calling out to her to shimmy, shake and spin.

Reigning Miss Gay USofA Classic Roxie Hart opened the show, lip-synching Whitney Houston’s epic version of the national anthem with the U.S. flag as a backdrop. A truly patriotic moment! Roxie later danced to a medley of tunes from “Chicago,” the Broadway musical from which she took her name. 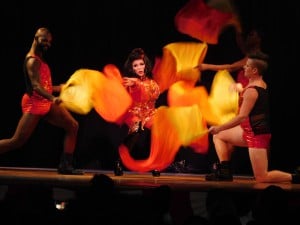 Amy DeMilo, competing for the title of Miss Gay Southernmost USofA, dazzled with a fiery performance in the talent competition.

The other queens were channeling iconic singers, too. Among them was Tommie Ross, Miss Gay USofA for 1988, who slinked across the stage in a long red sequined gown with a sprig of large white flowers in her hair as she lip-synched to Diana Ross singing “T’ain’t Nobody’s Bizness If I Do,” “Good Morning Heartache” and other Billie Holiday classics from the film “Lady Sings the Blues.”

Mokha Montrese and Jenna Skyy, 2015’s Miss Gay USofA and Miss Gay USofA for 2014, respectively, had audience members tapping their toes and shifting in their seats with swing tunes and rhythms of the islands and the Far East backing their performances.

Of course, the competitors were just as fierce as the champions we were seeing. 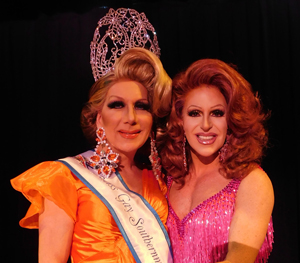 All of them proved in the talent portion of the competition that they’re far more than just beautifully made-up faces with expertly sculpted figures, high hair and exquisite jewelry and clothing.

For example, Amy DeMilo’s performance was a feast of color and high-powered club music. She danced downstage seemingly through fire — waves of red and yellow fabric that hunky assistants on either side of the stage shook and fluttered — to emerge unscathed before the audience.

Other standouts included Aurora Sexton’s tribute to Joan Rivers with a recording of one of Joan’s best stand-up bits, Daesha Richards’ soulful performance of song and dance and Joanna James camping it up to Barbra Streisand hits going back to the 1960s. 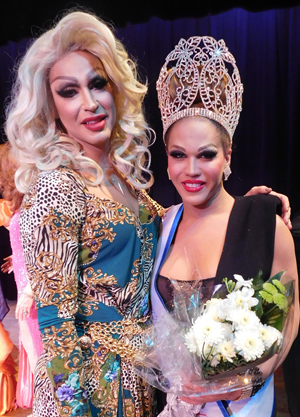 Yes, the pageant was breathtaking. But there was something else that also caught my eye that night.

About four rows down from me in the San Carlos theater sat Key West City Commissioner Jimmy Weekley, a longtime supporter of the LGBT community. Several rows down from Jimmy, on the opposite side of the theater, sat Police Chief Donie Lee, who is openly gay.

It reminded me how Key Westers, all the way up to our elected officials and city leaders, are not just open to the LGBT experience — but actively embrace it. And that only added to the beauty of the evening.