Everyone was talking about the trash can during “It’s a Watery World,” a recent art show at Stone Soup Gallery that featured the works of local artist and dear friend J.H. Allen. 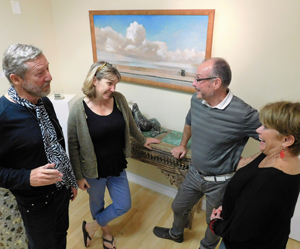 Key West has inspired creative types for decades, and perhaps none so much as painters. I know at least a dozen men on the island whose passion is capturing on canvas the island’s landscapes, wildlife and people.

About 250 people passed through Stone Soup that night as part of the Walk on White, a local event held the third Thursday of each month that offers everyone the chance to enjoy the works of local artists hanging in White Street galleries.

The trash can stands alone in “Smathers Beach, Morning Traffic,” a landscape oil that captures the billowing clouds and flat waters visible when you walk, run, blade or bike the wide concrete promenade along South Roosevelt Boulevard.

J.H., who has lived in Key West with his partner, Richard Logan, for the past four years, finds life on a tropical island inspiring. The watery scenes on the walls surrounding me gave the impression that I was indeed standing on an island. 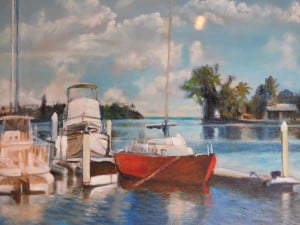 Two of my favorites among J.H.’s oils are “Scooting By,” featuring a kayaker on the flats paddling away from an approaching storm, and “Quiet Reflections,” which captures the beauty of a peaceful afternoon on the Boca Chica shore. J.H. has even immortalized his partner in “Nearly Noon, Bayview Park,” an oil featuring the figure of a man resembling Richard biking past the red poincianas and stone monuments decorating one of Old Town’s most frequented public parks.

It was exciting to see J.H. share his work with gallery visitors as they sipped wine and nibbled on cheese. He was particularly animated explaining his artistic process when handling the plasters, pigments and wood used in his frescos.

“Frescos allow me to be more abstract,” he told me. “I enjoy working with the material and putting it all together in one work of art.”

J.H. and Richard recently purchased a building across the street from their home on Margaret Street, where J.H. has set up a studio and private gallery of his works. 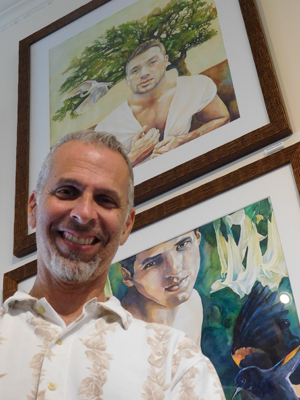 Kevin E. Peterson, owner of the KEPart gallery, is a well-known watercolor artist who paints turtles, pelicans and other island wildlife. (He’s also known for having designed the provocative window displays at the legendary Fast Buck Freddie’s department store.)

His passion, however, is depicting the male form. The works are more suggestive than all-revealing, with nude figures often painted from the waist up, turned to one side or seated with legs crossed in front of them.

Some of Kevin’s work hangs at Equator, an all-male resort several blocks from the gallery, and Art Frenzie in Wilton Manors, as well as at his gallery.

“I want this gallery to be the place to come for male-figuration art,” Kevin told me. “I want Key West to be on the map of collectors who collect this kind of art as a reminder that what they’re looking for is right here.”

Kevin, who has lived in Key West off and on since 1990, said he’s particularly happy about being just down Fleming Street from several of the island’s gay guesthouses, including Equator, Alexander’s Guesthouse and Island House. 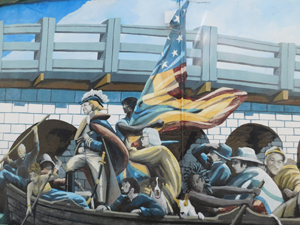 “Visitors see my art as they pass the gallery on their way to Duval Street,” Kevin told me. “It’s cool to be on this street.”

Rick Worth, perhaps best known for his large-scale murals around town, has been painting Key West-inspired scenes for more than 25 years.

The Rick Worth mural that I find most unforgettable, painted on the side of Bobby’s Monkey Bar at the corner of Olivia and Simonton streets, is affectionately titled “Wilhelmina Harvey Crossing the Seven Mile Bridge.”

A takeoff on a famous portrait of Washington crossing the Delaware, it portrays a “Washington” who looks much like the late Florida Keys Mayor Wilhelmina Harvey. Dressed in a traditional commodore’s outfit complete with a feathered tricorn hat, she is shown captaining a rowboat filled with oarsmen from all walks of life making their way toward the Middle Keys’ landmark bridge.