Dancing with a Star: Ganine Derleth

"Our first week living in Marathon, we attended a Rotary Club meeting and said, 'Hi, you're our new family' and everyone welcomed us with open arms," said Ganine Derleth. "I knew we had found our new home."

Born and raised in upstate New York, the talented Ganine Giorgione Derleth grew up doing tap, jazz and ballet with a mother who was a professional dancer.

"I was groomed for Broadway," Derleth said. "My mother raised me to be a dancer. She knew all the classes I needed to take to make a career out of it."

That's exactly what Derleth did. As a teenager, she moved with her family to Las Vegas, where she attended high school and college. She began her career with a job dancing on the famous Las Vegas strip at the MGM Grand.

A few years later, Derleth got the opportunity to travel across the country with the Broadway show "A Chorus Line."

"It was a great way to see America as a young woman," she said. "We would stay in each major city for a month at a time — and I was traveling with a major Broadway show!"

During her years as a professional singer and dancer, Derleth starred in productions including "The Will Rogers Follies" and "The Best Little Whorehouse Goes Public." She was even a member of the famed Rockettes dance company and appeared in the "Radio City Christmas Spectacular" in New York City.

By age 23, Derleth had also taken up ballroom dancing — for an exciting personal reason.

"I fell in love with a ballroom dancer, so I learned to ballroom dance because that's something we could share together as a couple," said Derleth. "We've been married for 31 years now and dancing the entire time."

In their early years, the talented couple owned the Fred Astaire Dance Studio on Broadway in New York City. Together they performed at some of New York's most famous venues including the Rainbow Room, Tavern on the Green, Cipriani's and the Copacabana.

After 13 years in the Big Apple, the couple took a vacation to the Florida Keys and realized that it was the place for them.

"We went back to New York, started selling and turning over our businesses and six months later we had moved to the Keys," Derleth said.

After their relocation to Marathon, the couple opened Theo and Ganine's Dance Center.

Located at mile marker 58, the studio offers private ballroom and Latin dancing lessons for visitors of all ages, as well as individually arranged group classes and parties.

"It's a nice change for the Keys," Derleth said. "At first our friends thought we were crazy and that this would never work, but the locals have really embraced the studio and are open to learning something new."

In addition to dancing, Derleth also has explored her passion for art and painting in the Keys.

Just a few doors down from the dance studio is Giorgione Fine Art, her art studio where she creates original oil paintings and offers a wine and painting party once a week.

Ganine and Theo Derleth also have become involved their small community of Marathon. She is vice chair of the Florida Keys Council of the Arts and a member of Marathon Business and Professional Women, among other organizations.

"I love the small-town community feel that Marathon has," she summed up. "It's a nice change from the big-city feel of New York." 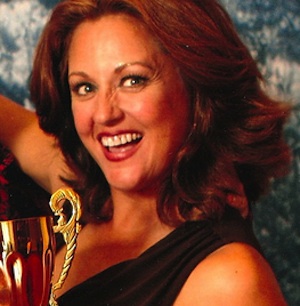 Derleth spent her early years as a professional singer and dancer, dancing on the famous Las Vegas strip at the MGM Grand and traveling with a major Broadway show.

In addition to dancing, Derleth also has explored her passion for art and painting in the Keys, inspiring her to open Giorgione Fine Art studio, offering a wine and painting party once a week.