Captain Skip Bradeen is in the cockpit of his beloved Blue Chip Too, barking instructions to his angler.

"Now listen to me," says Bradeen in his New York-staccato dialect. "He might be eating it. All right, hit him."

The angler reels down, raises the rod and a nice dolphin (mahi mahi) leaps into the air off the Florida Keys.

This month Bradeen, 72, marks his 50th year in the Florida Keys charterboat business. The legendary skipper is best known for his enthusiastic personality and quick wit.

Bradeen's love for the Keys began in September 1964 when he was 22 years old. He had just finished a stint in the U.S. Air Force and was destined to become a New York butcher.

In a Long Island, N.Y., bar he told some friends about plans to travel to Fort Lauderdale, Fla., for a vacation in his new Chevrolet Impala convertible.

"I had a few jingles (money) in my pocket and was going to Lauderdale to chase women for a couple of weeks before going back to Long Island and meat-cutting school," he said. "A buddy of mine asked if he could come and share expenses, because he had a job offer as a deckhand on the Tradewinds party boat in Islamorada.

"I had never even heard of the Florida Keys, but he talked me into passing Lauderdale to bring him down," Bradeen recalled. "I stopped at the dock to drop him off, got out of my car, walked around and this captain says to me, 'You wanna go fishing tomorrow?'"

Bradeen explained he didn't have money to go fishing, but the charterboat skipper offered him the opportunity to work as a mate.

"We went out the next day for a half day," Bradeen remembered. "Caught eight barracuda and went back to the dock at noon. He gave me a $5 bill after I cleaned the boat and the party gave me a $5 tip."

Thrilled with making $10 in a half day, Bradeen decided to stick around for a little while to learn the charterboat business while he painted the captain's motel.

Bradeen kept postponing his return to Long Island, and in the spring of 1965 he called his mother to deliver a final message.

In 1966 Bradeen purchased that first boat he had worked on as a mate for $3,200, including fishing gear. He's been a captain ever since.

The charter fee back then for the boat, called the Always, was $60 for a full day and $40 for half. According to Bradeen, gas cost 13 cents per gallon.

"So we fished a lot of blue-collar people," he said. "Pretty much everybody could afford that trip."

Today, due to soaring costs for fuel, insurance and other needs, Bradeen's charter fee is $1,300 for a full day and $900 for a half day.

And over the years, Bradeen's clientele has shifted to professionals and their families seeking to experience the skipper's entertaining style.

"I started fishing with Captain Skip when I was 7," said Barron Pritt, now 27. "My family and I came down here on vacation.

"We just picked a boat and we went," he said. "Now, we make it a reunion to come down here and always fish with Skip — nobody else."

Bradeen's style is to let his customers become fully involved in the angling experience. That's one of the reasons Saltwater Sportsman magazine named him one of 50 top charterboat skippers.

"The mate hooking a fish is not allowed on this boat, no matter what it is," Bradeen said.

And his clients appreciate that.

"He wants it to be a hands-on experience for you, so you know what fishing is," Pritt said. "He's always so happy and energetic and outgoing.

"He's going out there and wants to make sure everyone catches fish and has a good time," he said.

That's exactly what Bradeen's goal has been for more than 14,000 charter fishing trips.

"When they get off the boat, whether we catch a lot of fish or not, people say they had a wonderful time," said Bradeen, who has skippered for American presidents, rock stars and sports celebrities.

But the popular captain wants to be remembered best for his community benevolence. He coached Little League Baseball for 28 years and has served as master of ceremonies for countless fundraisers.

"I want people to remember me not as the greatest fisherman perhaps, but how I gave back to the community," he said.

Will Bradeen ever retire?

"That word is not in my vocabulary right now," he said. "When (Denver Broncos Quarterback) Peyton Manning lost the Super Bowl (XLVIII) they asked him about retirement. 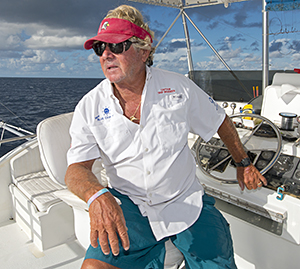 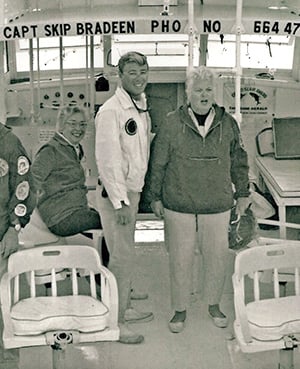 Bradeen, in 1966, with his first customers as captain of his first charterboat, the "Always." Photo courtesy of Skip Bradeen. 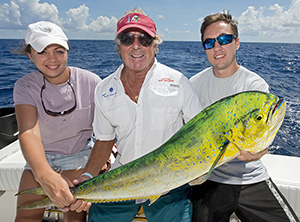 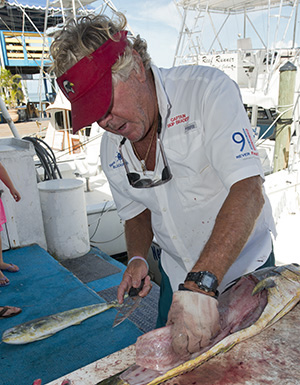 Bradeen filets a dolphin (mahii mahi) for his clients. 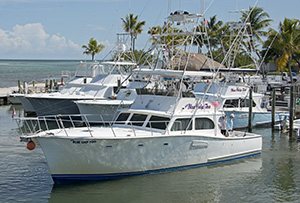 Bradeen currently owns and operates two Blue Chip Too charterboats based out of Whale Harbor Marina in .