FLORIDA KEYS -- Protecting Florida Keys waters is something that matters to everyone who lives in the island chain.

These venomous and toothy coral reef fish, with aliases such as dragonfish, firefish or turkeyfish, are part of the scorpionfish family and have no natural reef predators except humans. It's a daunting task for hunters armed with pole spears, slings and stringers to outsmart them and break their ridiculously quick reproductive cycle.

The average pole spear is lightweight, economical and surprisingly easy to use, ranging from four to 12 feet long and fitted with a sharp three-pronged (or "paralyzer") tip. Nearly any Keys dive shop stocks them and staff can provide some instruction.

Lionfish generally sit motionless with undulating pectoral fins. Highly recognizable by their red and white stripes, they are surprisingly slow, almost daring divers to spear or net them. Deep wrecks have been reported as being blanketed with the red-and-white feathery fish, with impressive lengths of 18 inches or longer.

Why do we want to wipe them from the reefs? Lionfish consume a variety of prey — invertebrates, juvenile grunts, hamlets, grouper and snapper — and can consume more than half their own body size. Their voracity has burgled both space and food resources from domestic species, yet man is their only natural predator.

It's crazy how fast they populate an area. And it only takes a couple of fertile females, laying tens of thousands of eggs at one time that are fertilized within 12 hours and hatch in three days. The newborns are out hunting at the tender age of three days.

As well as opportunities to seek them during everyday diving, specially planned derby events allow you to compete for prizes by capturing the largest, smallest and most lionfish — and you also can learn how to collect, clean and fillet this spiny fish.

Spines are removed before cooking, and the meat has no poison. Delicious and delicate, the light white meat tastes similar to snapper, grouper and hogfish (one of most Keys residents' all-time favorite local fish to eat).

Local's tip: Several Keys restaurants will cook your catch, or have lionfish as a regular menu item. At John Mirabella's Castaway Restaurant in Marathon, ask for it "wrecker" style, in a yummy sauce of capers, garlic, butter and diced tomato.

Captured during a lionfish derby, this baby fish being held in a diver's glove, measured a mere centimeters.

Highly recognizable by their red and white stripes, lionfish are surprisingly slow, almost daring divers to spear or net them. Photo: Adam Nardelli 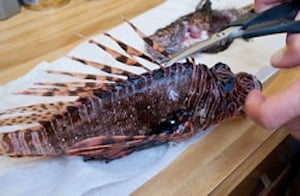 Spines, the only venomous parts of the lionfish, are removed before cooking preparation to eat.