"Kids down in the Florida Keys, they're kids of charter fishermen so they grow up on the back of a boat," said Evan Doumis. "I grew up in the back of an airplane."

At age 32, with an astounding 10,000 accumulated flight hours, Marathon resident and pilot Doumis is the embodiment of setting a life path and sticking with it, while peppering it with a little mischief along the way.

Since May 2013, he has been one of two captains of the open-cockpit Waco UPF-7 biplane of Overseas Aero Tours, Marathon's latest in-flight attraction and what Doumis calls a true to-the-bone family business.

Doumis and stepfather Brad Neat take turns flying the classic 1940 plane on scenic trips of 10 to 20 minutes over the island, historic Pigeon Key and the old and new Seven Mile bridges, while sharing local and historic trivia over an in-helmet microphone with the plane's two passengers.

On the ground, Doumis' mother Joy, equipped with an iPad, juggles reservations, payments and the occasional tennis ball toss for Boudreaux, a mini Australian Shepard unafraid of the biplane's comings and goings.

"[The plane] speaks to you, talks to you, tells you what's wrong," he added, having recently installed a new Continental 220 horsepower engine that can reach speeds of 100 mph.

Doumis' pragmatic outlook came at an early age, "bucking rivets (structural fasteners), changing oil and doing all the stuff that needs to be done to keep a plane flying," at an air park in Fort Myers, Fla., where his father's charter flight company was housed.

He relocated to the Keys during middle school with his mother and older sister, who also are pilots. By the time he graduated from high school, he had earned both a boat captain's license and a license to fly a plane solo — an achievement he had some teenaged fun with when he buzzed his high school's athletic field at low altitude.

Doumis' stunt did not go unnoticed by authorities, although he continued to acquire every single-engine commercial and multi-engine commercial land and sea rating he could amass. Since this made pursuit of a flight operations degree from Embry Riddle Aeronautical University redundant, he decided to study meteorology.

"You fly in weather, and as a pilot you have to plot weather, read maps and charts ... why not study weather?" he said with a wide grin.

Doumis' experience is impressive. He was selected by Continental Connection airline right after college to fly a 19-seat Beech 1900 for Continental Connection airline out of Key West, followed by nearly two years overseas flying for a civilian contractor in Afghanistan. He arrived home from that dangerous duty within one day of the birth of his daughter Peyton with longtime love Stacy VanKirk.

"I got home, took a nap, and the baby came," Doumis said.

The life-changing start of the young entrepreneur's own family gave him pause. It planted the seed for establishing his own business in the islands he calls home, where he grew up diving, fishing and catching lobster.

These days, Doumis' time is occupied between flying, cutting the grass and keeping his two Weimeraners, Morgan and Kimber, from stealing celery sticks from Peyton.

In addition, he's building his daughter a pedal plane, a variation on a toy car that's fitting for the child of an aviation professional. It might even help inspire her to become a next-generation Keys pilot.

"No matter what, people are so amazed at what they see from the air ... sharks, spotted eagle rays," Doumis said. "The most fun is finding a pod of dolphin, because it's not very frequent. I love this place." 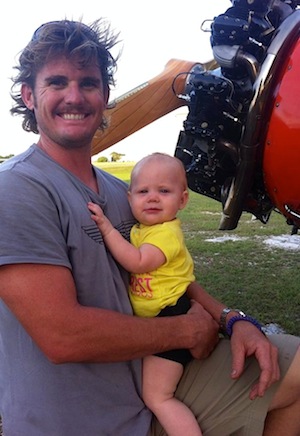 Daughter Peyton, at nine months, is already learning about her father's passion of airplanes. 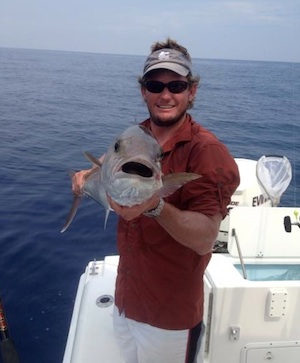 Doumis squeezes in time on the water between piloting and parenting. 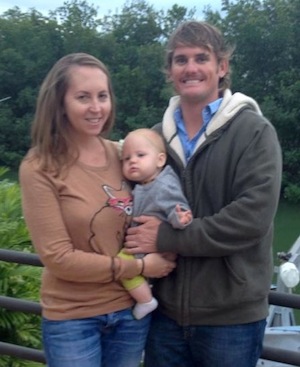