Robert Stoky knows good cooking. Whether it's preparing lobster fajitas at Señor Frijoles or all-you-can-eat stone crab at Ballyhoo's, the Stoky family has been a key player in the ever-growing Florida Keys restaurant scene since the 1980s.

When the family moved to the Keys from Miami in 1973, they quickly set their sights on cooking and restaurants.

"My father was a charterboat fisherman, so we had to figure out a way to eat the fish that we were catching," Stoky said.

By 1981 his parents had acquired Señor Frijoles in Key Largo from a family friend. Stoky quickly embraced the family business and worked in his parents' restaurants, beginning as a dishwasher. He eventually learned the in's and out's of food preparation and became a chef.

Today, Stoky is owner/chef of popular restaurants in the Upper Keys including Señor Frijoles, Sundowners, Cactus Jack's, Ballyhoo's and Marker 88 — all grouped under the Florida Keys Restaurant Management banner.

Growing up in the Keys was an adventure for Stoky.

"We had a boat that was basically our car," he said. "My younger brother and I would go from island to island, fishing and diving."

Following his parents' example, he became an entrepreneur at a young age.

"We got gas money from commercial fishing," he explained. "We would catch fish and sell them — grouper, snapper, everything — then we would use that money, buy more bait and fuel, and go out again."

In 2012, Stoky added "author" to his list of accomplishments when he decided to share some of his experiences and cooking techniques in his cookbook "Recipes and Tall Tales from the Legendary Restaurants of the Florida Keys." The book features Keys essentials from rum drinks and cocktails to learning how to make sea salt and prepare lionfish.

His favorite ingredients, true to Florida Keys form, are fresh Florida stone crab and key lime. He draws inspiration for his cooking from locally sourced food.

"I want to take advantage of the fresh seafood and tropical fruits the Florida Keys have to offer," Stoky said.

An active member of the Upper Keys Business Group, Stoky also spearheads a wide variety of Key Largo events, including the Stone Crab and Seafood Festival, the Anything That Floats Race and the annual New Year's Eve fireworks display on Blackwater Sound. He also lends his skills to "Uncorked —The Key Largo & Islamorada Food & Wine Festival" and Key Largo Conch Republic Days.

As for opening up new restaurants, Stoky is very happy with what he and his family have created.

"We want to refine the menus that we currently have," he said. "We want them to be more chef-crafted."

While the restaurant industry is constantly evolving and food trends come and go, it's clear that Robert Stoky will stick close to his family roots. His "recipe" is simple yet meaningful: continue to provide his customers the freshest seafood and some of the most delectable dishes the Florida Keys can offer. 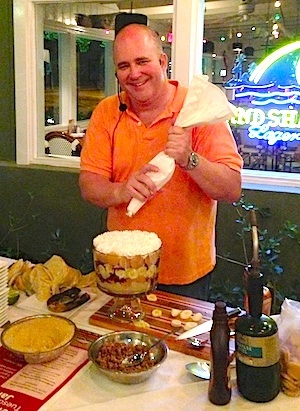 Early on, Stoky learned the in's and out's of food preparation and became a chef.