Driving down the Keys' Overseas Highway from mainland Florida, visitors who turn right at the Sugarloaf Lodge at mile marker 17 and travel a short distance will find themselves facing a shingled tower rising out the surrounding foliage. Somewhat weather-beaten, it is nevertheless a monument to a great idea hatched in the Keys.

Locals call it the Bat Tower, and it was built in 1929 at the instigation of a man named Richter Clyde Perky.

While much of America was reeling under the impact of bank failures and the Great Depression, Perky faced a problem far less devastating, but irritating nevertheless: mosquitoes.

Perky was the largest landowner in the Keys in the late 1920s. His pet project, the town of Perky, lay in the Lower Keys at what is now called Sugarloaf Key.

The town was designed as a fishing retreat for wealthy tourists. It featured a lodge, marina, restaurant and guest cottages. However, it also featured swarms of enormous mosquitoes that had a negative impact on Perky's tourism despite the excellent fishing.

Richter Clyde Perky was not a man to let problems get him down. When he encountered a book called "Bats, Mosquitoes, and Dollars" by Dr. Charles A.R. Campbell, he saw a potential solution for the mosquito menace.

Campbell had written the book in an attempt to prove the importance of bats in controlling mosquitoes. His experiments led to the construction of several bat roosts in Texas to house the mosquito-eating mammals, and his work came to the attention of the desperate Perky.

Perky contacted Campbell for the plans for the bat roost, which Campbell reportedly forwarded free of charge. Construction on the Keys' tower began in March 1929.

In accordance with the doctor's specifications, the 30-foot-high structure was located in a quiet area and left unpainted. It looked like a tall, angular, tapered edifice on four posts with a louvered bat entrance. Completed in September 1929, it was said to have cost Perky nearly $10,000 to build.

Unfortunately, the end of the construction didn't herald the end of Perky's mosquito problem. Bats, it seems, can't easily be transplanted from one home to another — so Campbell provided a secret "bat bait" to entice them to the tower.

The bait reportedly had a base of bat guano plus the ground-up sex organs of female bats. According to Perky's construction supervisor, its smell was powerful and indescribable.

Theoretically, the bats were supposed to be irresistibly drawn by the bait, adopt the tower as their home, and leave it each night to devour mosquitoes. Unfortunately, things didn't work out that way.

Florida Keys legend offers two versions of what actually happened. Some say Perky installed bats that flew away almost instantly, never to return. Others say the bait, no doubt becoming riper and riper under the Keys' subtropical sun, remained in the tower for a year without attracting a single wandering bat.

When Richter Clyde Perky wrote to Campbell for another box of bait, he received bad news: the doctor had died, taking the secret of his formula for bat bait with him to the grave.

These days, the Florida Keys Mosquito Control District does an excellent job of keeping the pesky insects in check. Perky, who with the rest of the population came to appreciate the humorous aspects of his tower, has long since died.

The bat tower, however, is now a beloved local landmark. It still stands tall behind the Lower Keys' Sugarloaf Lodge, a mute testimonial to a great Keys idea. 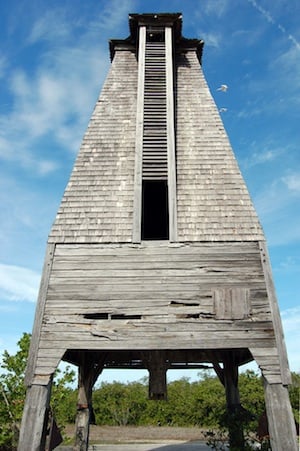 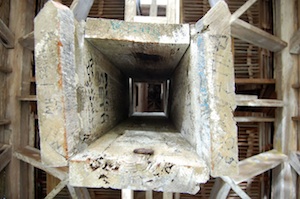 Bats were supposed to be irresistibly drawn into the tower by bait, a base of bat guano plus the ground-up sex organs of female bats. 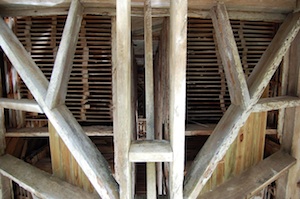 Looking up, inside the singled pine tower.