MARATHON, Florida Keys — Although she originally was more interested in working with porcupines and skunks than birds, Kelly Grinter has spent 18 years at the helm of the Marathon Wild Bird Center and is now one of the Florida Keys' most prominent wildlife rehabilitators.

Grinter came to the Keys in 1995 to intern at the Wild Bird Center in Tavernier, in part to escape the cold of a Massachusetts January and an unsatisfying career in graphic design.

An ornithologist friend's passion and knowledge about birds convinced her to relocate and learn. "I discovered that birds were light for flight and had high metabolisms, and thought, 'Okay, they're interesting,'" she said.

She also was intrigued by the Florida Keys' location within a migratory flyway, where 10,000 or more birds pass the same travel paths each year. Winged travelers ranging from small songbirds or warblers to birds as large as bald eagles — white ibis, brown pelicans, red-shouldered hawks, ospreys, double-crested cormorants, raptors and a concentrated population of peregrine falcons — take a migratory break in the fall before they head farther south to Cuba.

Within a year, Grinter was offered the top spot at the Marathon Wild Bird Center at the Museums of Crane Point, tucked inside a 64-acre hardwood hammock at mile marker 50 on Florida Bay. The center's mission is to rescue, rehabilitate and release injured birds, and it treats 500 or more migratory and native birds annually.

"The coolest thing about coming to the Marathon Wild Bird Center is you get to see these birds up close and personal," said Grinter.

People might glimpse a red-tailed hawk, pelican or osprey in flight or in their nests, she explained, but sightings in the wild rarely offer the chance for a close-up examination of the bird.

"Here, visitors can see their plumage, interact with them and discover they each have their own personality," Grinter said. "Families learn together."

During the past 18 years, Grinter has performed thousands of avian rescues. Among the most harrowing was that of a juvenile female pelican that had swiped and swallowed the 8-inch filet knife a fisherman was using to cut mackerel at his cleaning table.

Afraid she would lose precious time transporting the bird to the center's hospital to anesthetize it and surgically remove the knife, Grinter attempted to extract it right then.

"The blade was pointing straight up, so I figured all I had to do was pull it up and out," she recalled. "After a few unsuccessful attempts at grabbing the slimy blade, I put on latex gloves and on the count of one-two-three, up and out came the knife, without a drop of blood."

The crowd that had gathered erupted in cheers, likely learning a valuable lesson about cleaning (and feeding) areas.

"I told the pelican not to do that again and released her back into the water," Grinter said.

At 42, Grinter remains steadfast in both her enthusiasm and commitment. In 2006, she was named a finalist for the Animal Planet cable television network's Hero of the Year award. She also has been tapped to speak at state and international rehabilitators symposiums, teach online courses for rehabilitators and record webinars.

The facility at Crane Point plans to continue educating Middle Keys residents and visitors in addition to hosting students and postgraduates as part of its ongoing internship program.

Grinter said she is fueled by life-affirming events such as the birth of baby cormorants at the center and the release of the young birds into the wild. The adult birds, permanent residents in the facility's flight habitat, successfully raised their clutches (the eggs hatched by a bird at one time) and are again reproducing this summer.

Grinter's toddler son, Noah, accompanied her on the release so he could watch and learn. The mother and son, both avid outdoors enthusiasts, enjoy kayaking, paddleboarding and collecting butterflies.

"I love what I do, caring for these innocent creatures. Honestly I can't see myself doing anything else or living anywhere else," Grinter said. "Our hospital is here to help the birds that people find — people who care.

"I want to help others learn how to care for birds," she added, "and I want my son to be an advocate for the birds of the Keys." 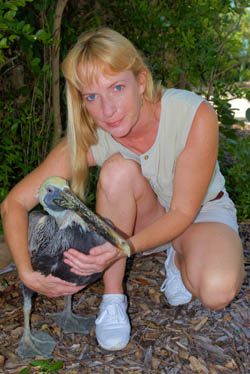 Kelly Grinter left a career in graphic design nearly 20 years ago, and discovered rescuing and rehabilitating injured birds was a new passion.

It's feeding time at the Wild Bird Center.

Nearly 500 or more migratory and native birds arrive at the Marathon Wild Bird Center annually, and are cared for by Grinter and her small staff.