ISLAMORADA, Florida Keys — An Islamorada-based artist, known locally as "Lighthouse Larry," has fashioned his passion for lighthouses into creating exact scale replicas of six historical beacons off the Florida Keys — three of them built before the Civil War.

Born in Chicago, Larry Herlth, 52, has lived nearly all his life in the Keys, excluding high school years spent in California with family in the U.S. Coast Guard.

As a kid in the Keys, he was amazed at a local lobster fisherman's ability to carve a dolphin from coral rock, yet discovered he too was adept at the craft. Soon, people were asking him to carve coral rock dolphins.

When he returned to Islamorada after school, he further developed his aptitude for sketching and creating sculptures in stone and coral rock.

But it was a request from a friend to build a dock jetty light that inspired Herlth to turn his artistic sights to lighthouses. He first created a replica of Alligator Lighthouse off Islamorada, which dates back to 1873, and his enthusiasm snowballed from there.

Now, having forged replicas of the 160-year-old Carysfort Lighthouse located off the northern end of Key Largo and Sombrero Lighthouse off Marathon, as well as Alligator Light, Herlth hopes to re-create each of the once-lived-in and manned lighthouses following the Florida Keys island chain — in several sizes. He plans to include Fowey Rocks off Key Biscayne, the ornate Victorian-era American Shoals, the last lighthouse that was built in 1880 off the southernmost tip of Big Pine Key, and Sand Key, built in 1853 off Key West.

Herlth's passion earned him his Lighthouse Larry nickname. He finds it a bit comical, but accepts it for a serious reason.

"In building the lighthouses, learning their history, talking about them around the community, I have taken on a true desire to get the word out to save them because of the historical value," he said. "If that leaves me with the name Lighthouse Larry, so be it. I am proud to wear that name."

Herlth creates his replicas from photographs of each lighthouse, using copper and brazing techniques to heighten and achieve the visual effects of smaller details. He spends an average of 200 to 300 man-hours on a single replica, depending on the size. For pieces more than 20 feet tall, he uses stronger welded steel.

"I strictly go by picture(s) and my eye. I don't use blueprints," said Herlth, whose work is considered expressionism blended with realism. "There's no challenge in using plans — if it feels right, that's what I do."

Today, Herlth and his wife Keira have two daughters, 23-year-old Lacy and 15-year-old Kyia. An avid triathlete and spear fisherman, Herlth is a soft-spoken man whose influence on his daughters is apparent. Both are artistically inclined and the eldest is destined for a graphic arts career.

Lighthouse Larry's sculptures are publicly displayed outside Upper Keys banks and restaurants, including a 20-foot replica of Alligator Light at Islamorada's Kaiyo Grill. His intention is to create a lighthouse park where people can stop, read the entire history and see what stands just offshore of the Florida Keys.

"I do want to bring attention to the actual beauty of these lighthouses in their design and incredible architecture and strength," Herlth said. "They have held up to the wind, the oceans for 160 years, through many hurricanes, and they are still standing — and hopefully will always be standing." 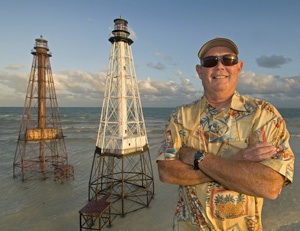 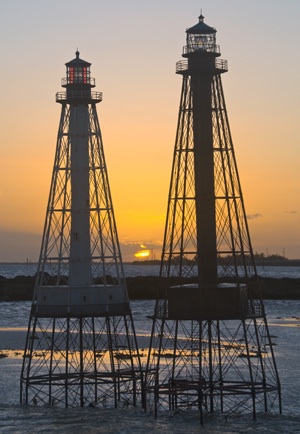 Herlth pays great attention to detail, recreating each feature of the original to scale. 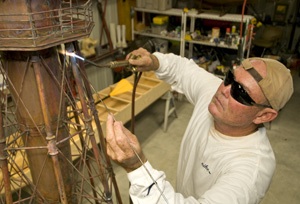 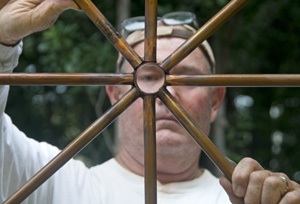 Skilled with his hands since a young age, Herlth does not use blueprints or plans, planning his projects with photographs and the naked eye.