Jimmy Johnson: From Football to Fishing in the Florida Keys

ISLAMORADA, Florida Keys — Jimmy Johnson had just won his second consecutive Super Bowl in 1993 and was celebrating with his Dallas Cowboys team in the locker room when Cowboys owner Jerry Jones jammed a phone in his ear.

The caller was Bill Clinton, then president of the United States.

"He said, 'Coach Johnson, I want you to come to the White House, and congratulations on winning the Super Bowl,'" recalled Johnson, 67, who also coached the Miami Dolphins and led the University of Miami to a national championship.

Standing next to him, Jones was shocked that Johnson had refused an invitation from the president.

"Jerry Jones grabbed the phone and he says, 'Yes, Mr. President, we will be at the White House,'" Johnson said, laughing. "I wasn't even thinking, but that was my mindset — I wanted to go to the Florida Keys."

Johnson has had a residence in the Keys since just after that second Super Bowl victory. He moved to his current home in Islamorada 11 years ago and his name graces Jimmy Johnson's Big Chill at Fisherman's Cove, a dining and entertainment complex as well as a private residence club in Key Largo.

Johnson began visiting the Keys in the mid-1980s while he was head coach at the University of Miami. Toward the end of his tenure at UM, he earned his dive certification and developed a lasting love for the subtropical island chain.

"I came down to the Keys for my final open-water dive and just fell in love with the place, the people and all the things you could do down here," he said.

He decided he eventually wanted to live in the Keys while he was the Cowboys' coach.

"We were kind of landlocked," Johnson said of his time in Dallas. "I bought a 39-foot Larson and put it on Lake Lewisville and (we would) go round and round in circles on my day off. We looked at the black water and I had memories of how beautiful the water was in the Florida Keys."

When he retired from Dallas, Johnson sought a home offering specific benefits.

"I wanted to get away from all of the hustle and bustle and autograph seekers, and go to an area where I could just lay back and enjoy life," he said. "(In the Keys) I can go out anywhere and not be bothered."

"I got into the fishing 10 years or so ago and absolutely love going out on the ocean," he said.

Behind his Islamorada estate he keeps a 39-foot SeaVee center-console boat named "Three Rings," after his three coaching championships. A dedicated room houses an extensive collection of rods, reels and boxes of lures and other tackle. Photos in the room and on his iPhone showcase past notable catches including a big bull dolphin (mahi-mahi), large wahoo and most recently an estimated 235-pound blue marlin he caught while fishing alone.

In fact, Johnson usually fishes alone — a testament to the real reason he enjoys the sport.

"I fish for fun and relaxation," he said. "I don't fish for meat. I don't fish to brag to everybody what I can catch."

Johnson has a close circle of Keys friends that occasionally goes with him.

"When I have my friends on board, we have a ball," he said. "We laugh and cut up and talk about fish they lost or laugh about getting lines tangled up."

Generally, however, he enjoys the freedom of solo angling, without a schedule or pressure to catch anything. Sometimes he doesn't even put a line in the water.

"When I was coaching, everything about my entire life was so regimented," Johnson said. "Now, going out by myself fishing, I don't have a schedule. I load the boat and I go out and stay as long as I want to stay."

That's where he usually can be found — except during the NFL season, when he travels weekly to Los Angeles to help anchor "Fox NFL Sunday" with Curt Menefee, Terry Bradshaw, Howie Long, Michael Strahan and Jay Glazer.

"There's only two things that get me away from the Keys," said Johnson. "The Fox TV show, and if someone gives me a big check."

Former NFL and University of Miami football coach Jimmy Johnson and friends head off of Islamorada at sunrise for a day of fishing, July 14, 2011. Photos by Andy Newman/Florida Keys News Bureau 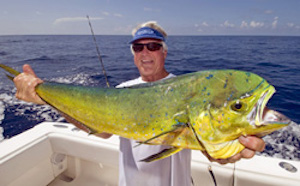 Johnson displays a nice dolphin fish he caught while trolling in his "Three Rings" center console fishing boat off Islamorada. 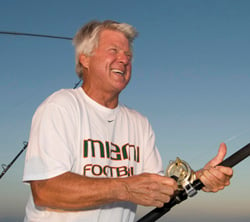 Johnson reels in a blackfin tuna. 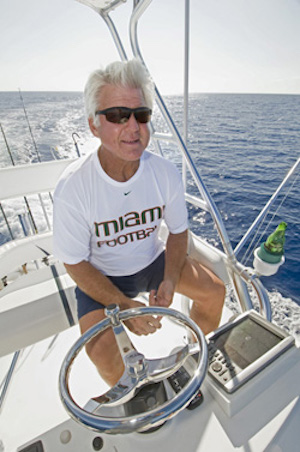 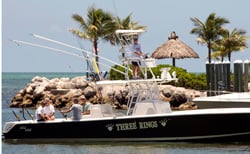 Coach Jimmy Johnson at the wheel of his "Three Rings" center console fishing boat in Islamorada after returning from a day fishing off the Florida Keys.