In the 1700s sailors with the British Royal Navy brought fine goods to the Caribbean colonies, sailing the seas and earning the nickname "limey" for their practice of sucking limes to prevent scurvy on long voyages.

Today, Tony Murphy is a limey who brings fun and laughter to the Florida Keys, both with his light-tackle guide business on his boat Key Limey and at Captain Tony Murphy's Saltwater Angler fishing outfitter.

"I always want to have fun; it's all about having fun," Murphy said. "When it comes to guiding, if you're having fun, your equipment is fantastic, your boat is clean and you present yourself ... then the fish are just extra."

Murphy attributes his success as a guide to his passion for fishing and unconditional ability to have fun.

He caught his first chub fish at age 4 in the Thames River, and he's been hooked on angling ever since. The self-proclaimed fishing fanatic grew up in London, and spent every weekend fishing with his uncle 30 miles away in Henley.

A two-week teenage holiday turned into a life change for the Londoner when he met a third-generation Key West native, fell in love, got married and moved to the Keys.

Murphy began living in the Keys in 1986 and took his first job on a boat in 1988 as the first mate on the Lucky II. Later, with two days' instruction, he learned commercial fishing and spent four years pursuing the profession.

"Down here when you actually show up for work, word gets around," Murphy said. "You get a lot of opportunities and sometimes lucky things just happen to you."

Even as a young man in his 20s, Murphy found the commercial fishing industry took a toll on his body, so he transitioned into guiding. In an era when Key West boasted some of the pioneers of angling, his youth and attitude enabled him to reel with the best of them.

"What was a little different for me, early on, was that the guides that were around at that time were a little bit older and a lot grumpier," Murphy said. "I really like to make people laugh, feel comfortable and relax."

The limey's lively persona and guiding expertise earned Murphy the limelight on many television shows over the years.

He was one of the expert anglers who worked with ESPN to put together the Madfin Shark Series Tournament, also a top-rated television series, and participated in and won the event for three consecutive years. In addition, he was the guide of three television shows based on shark fishing for the famed Bill Dance of "Bill Dance Outdoors."

Murphy's most challenging catch came in 2008, when a client offered him the opportunity to purchase a premier Key West angling outfitter called the Saltwater Angler.

Today he guides a few days a week, mostly for repeat clients, but spends most of his time running the Saltwater Angler. There he oversees 24 employees and refers business to 32 flats guides, 15 light-tackle guides and eight offshore boats. He hopes to make the Saltwater Angler an iconic shop that's a must-see for all visitors to Key West.

"In the Florida Keys, we have so much going for us," he said. "By the time we get people down here, it's our job as guides to make sure they have a 'Florida Keys experience,' and I love being a part of their experience."

Murphy is remarried, raising two sons and devotes his free time to his family. Happily settled in the subtropical Keys, he never wants to live in the cold hustle and bustle of London again — but, like a true limey, will forever have a passion for soccer, rugby and cricket.

Murphy is a self-proclaimed fishing addict. 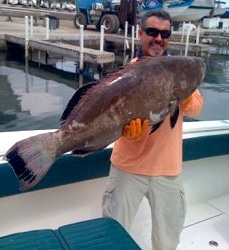 After years honing his skills, Murphy is an expert angler and guide, but spends most of his time managing the Saltwater Angler.

Murphy's philosophy is "When it comes to guiding, if you're having fun, your equipment is fantastic, your boat is clean and you present yourself ... then the fish are just extra."