Gloria Teague: From Karaoke to Cakes

Proving the old adage that a song can change lives, Gloria Teague was forever changed by the James Brown tune “I Feel Good.”

When Teague heard pastry chef Robert Spencer Jr. sing his karaoke version of the iconic hit, she was so impressed by his talent that she approached him and said, “That was amazing. I’ve got to know you.”

Originally from Washington D.C., Teague relocated to central Florida with her family of 13 when she was just 10 years old. Spending family vacations camping in the Keys, she fell in love with diving and Keys waters.

Eager to move to the island chain, she took a casual comment made by Captain Spencer Slate of Atlantis Dive Center (“Well, when you’re ready to move, let me know.”) as a job offer. She arrived in the Keys in 1990 and worked closely with Slate for several years before opening her own dive shop, Lady Cyana.

“The dive business was very difficult,” Teague said. “In fact, the restaurant business is probably the only thing that’s more difficult — and that’s what I’m doing now.”

After Teague and Spencer’s meeting at karaoke, their friendship blossomed while Teague worked as a dive master and Spencer worked as the chef for the Islamorada Restaurant & Bakery’s then-owner. When the enterprise went up for sale, Spencer approached Teague about purchasing it with him. Despite having no restaurant experience, she decided to trade in her scuba tank for cinnamon buns.

“The only thing that qualified me to own a restaurant is that I’ve eaten out every day of my adult life,” she said. “But Rob is a great teacher and I learned in dog years.”

Today, the restaurant is known for friendly service, elegant wedding cakes and the gigantic cinnamon and sticky buns Spencer creates, giving it the nickname Bob’s Bunz. In fact, the buns are so large that Teague is convinced the Overseas Highway weigh station at mile marker 80 was put up because of all the calories consumed at Bob’s Bunz.

Adorning the walls of the partners’ emporium are many T-shirts and novelties Teague created with their catchphrase “the best bunz in town” and other sayings like “bite my bunz.”

“My goal is for everyone to leave with something in their hands, and not just in their tummies,” she said.

The first thing she does when she arrives at the restaurant each day is greet the customers at every table. As well as co-owner, she’s the official taster of all new menu items. She even enjoys busing tables, checking out what dishes diners did or didn’t eat and making menu adjustments accordingly.

Teague admits she loves working with people, especially the many brides and grooms whose wedding cakes the bakery designs. They prepare between 300 and 400 wedding cakes per year, and the most popular is their Key lime cake. It’s so delicious, Teague boasts, that she has never met anyone who didn’t like it.

She and Bob’s Bunz strive to serve consistent, high-quality food and test their success by making sure everyone walks out of the restaurant “hugging their bellies.”

When she’s not working, Teague spends time riding her bike around the Upper Keys, diving the reefs or exploring her favorite spot, Windley Key, which she calls the area’s best undiscovered tourist attraction. And every Sunday night, she and Spencer still can be found at karaoke at Key Largo’s Coconuts Restaurant & Lounge — the spot where they first met and a song changed their lives.

Before relocatiing, Teague spent family vacations camping in the Keys, and she fell in love with diving and Keys waters.

Teague has comfortably settled in to the "conch" lifestyle. 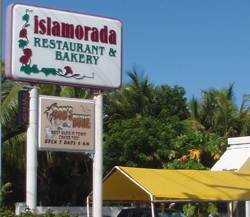 Teague strives with Bob’s Bunz to serve consistent, high-quality food and test the meals' success by making sure everyone walks out of the restaurant “hugging their bellies.”

Of the hundreds of cakes the bakery designs, a frequently requested - and unusual - confection treat is one with an ocean motif.