He stands only three feet tall, but Robert the Doll looms large as a Key West celebrity. He’s internationally renowned for his mischievous deeds, receives letters and e-mails from all over the United States and has more than a thousand Facebook friends.

Despite being a bit older than the average celeb, Robert has made television appearances on the Travel Channel, Discovery Channel, numerous regional stations and more.

Some might scoff at such attention being paid to a straw-stuffed doll — but Robert, who has been dubbed a “paranormal pop star,” is no ordinary doll.

Robert’s career began in 1904 when he was given to a Key West boy named Robert “Gene” Otto — some say by a voodoo-practicing nanny or family maid. Young Gene gave the doll his own first name and, throughout his childhood, blamed Robert for naughty deeds and bad behavior. Even when Gene grew up and married, the doll remained his alter ego.

While Gene gained renown as an artist, Robert — living in his own room in the Otto family home, despite strenuous objections from Gene’s wife Anne — gained renown of a far more unsettling sort. Children passing by glimpsed him leering from the windows of the home’s turret room and, according to local lore, a workman heard the doll giggling at him.

In 1974, Gene Otto died. Anne sold the house and quickly departed, leaving Robert behind for the new owners to find. Eventually, the disturbing doll was donated to the Key West Art & Historical Society.

A doll of few words, Robert is a master of nonverbal communication. He particularly delights in creating “special effects” on museum visitors’ photographs. They often appear inexplicably ruined unless he’s asked beforehand if he minds having his photo snapped.

In 2000, when Pennington “met” Robert, he was part of a “Key West Oddities” exhibition in a poorly lit glass case. Subsequently, she became aware that he was not just another artifact. “As the years passed, I became aware of how many people, after visiting Robert in the museum, wrote to him about their problems with photographs,” said Pennington. “We decided that these unsolicited letters were part of Robert’s story, and in 2004 we moved Robert into his own gallery with a large space dedicated to cards and letters from his fans.”

Since then, Robert has become an eerie icon. In July 2010 alone, his website got nearly 90,000 hits. He recently was a “guest star” at a convention of the Atlantic Paranormal Society in Clearwater, Fla., and appeared on local television as well. Like other celebrities, he was under constant surveillance by a high-level security team throughout his road trip.

Despite his fame, Robert remains basically unchanged. Just as he did when he and Gene Otto were inseparable, he seems to enjoy playing tricks.

In fact, he even surprised Clear Channel radio host and paranormal expert Joshua Warren during Warren’s recent investigation of him at Fort East Martello. Two rolls of Warren’s special 3D film mysteriously failed to record Robert’s image, even though the noted photographer and paranormal pro had been using the camera for more than two years and had never experienced such problems before.

“I do not think of Robert as a ’possessed‘ or wicked doll — he is a mischievous spirit who seems to love pulling a few pranks,” said Pennington. “We love our Robert and are pleased that he continues to bewitch new audiences, who also explore the exhibits in the old fort and learn more about our island’s history.”

Robert, who has been dubbed a “paranormal pop star,” is no ordinary doll. Photo by Kathy Koontz 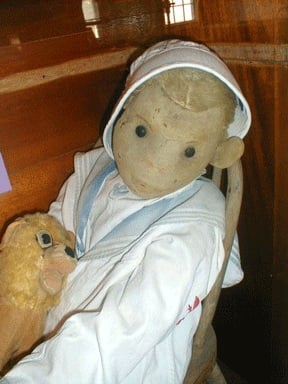 Robert the Doll was given to a Key West boy named Robert “Gene” Otto — some say by a voodoo-practicing nanny or family maid. Gene named the doll after himself, creating a kind of alter ego.