All the World’s a Stage for Pianist Bobby Nesbitt

He has performed for audiences around Europe, starred at a famed San Francisco venue and been the first American singer/pianist to play in the American Bar of London’s Savoy Hotel. Nevertheless, Key West keeps calling Bobby Nesbitt home.

Much to the delight of Key West audiences, the renowned entertainer keeps heeding that call, returning to tickle the ivories at island hotspots including Keys Piano Bar and Aqua Nightclub. Hailing from a family of musicians — his father is a singer and his mother plays the clarinet and a little piano — Nesbitt tackled the trumpet when he was 8 years old. At 10 he began taking piano lessons from a very strict teacher who taught him music theory, something he still appreciates. During that time, he also honed his chops by performing in school plays. After a couple of years of lessons, Nesbitt realized that performing was his destiny. He majored in theater and music in college and after graduation moved to New York City with the dream of performing on Broadway. “However, in New York they were more interested in the fact that I played piano and sang,” Nesbitt said. “You find a real viable niche in show business and develop it, which is what I did in the Big Apple.”

In 1976 he and a friend visited Key West, and he decided to stay.

“The doors just opened for me in Key West,” said Nesbitt. “It’s a very welcoming community and I had great success here right away.” He lived on the island for six years, leaving in 1982 to work in Europe for three years. He returned to Key West, but later “ran away one more time” and went to San Francisco, where he performed at the famous Fairmont Hotel. When Key West beckoned again, again he returned. “Now I winter in Key West and spend my summers in Cape Cod,” he said. Nesbitt is best known for performing music by 20th-century masters of song like Cole Porter and George and Ira Gershwin. Such American standards were favorites of his European audiences. After playing at so many notable venues outside the Keys, he has nothing but praise for Key West’s audiences and its cultural community. “It’s the most extraordinary arts community around,” said Nesbitt. “We’ve got so much talent in Key West. You can experiment. It’s welcoming to artists and the audience is so supportive — and very intelligent.” Despite holding down a “day job” in real estate, the energetic Nesbitt maintains a jam-packed performing schedule. Highlights include his “Bobby in the Lobby” cabaret series at the Tennessee Williams Theater, which is popular with locals and visitors alike.

His February performances highlight the hits of Frank Loesser, renowned for composing “Guys & Dolls,” and in April’s shows he’ll perform Cole Porter tunes. The outgoing entertainer is particularly pleased to see ever-larger numbers of visitors — including repeat visitors — that appreciate the Key West arts scene and seek out cultural events to attend.

“It just gets better and better,” Nesbitt said. “Key West evolves all the time.”

Nesbitt, pictured here in San Francisco before a performance at the Fairmont. Photos courtesy of Bobby Nesbitt 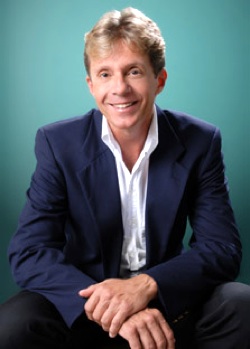 Nesbitt realized early in life that performing was his destiny.

Nesbitt with the Godfather of Soul, James Brown.